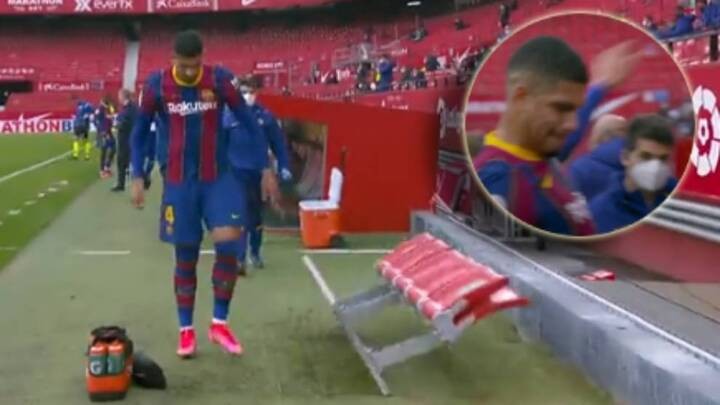 After five matches out with an ankle injury, Ronald Araujo lasted just 15 minutes on his return to action for Barcelona against Sevilla.

The Uruguayan replaced Gerard Pique, who was suffering from a fitness problem himself, in the 67th minute of the game.

However, in the 82nd minute, the 21-year-old asked to be substituted himself because an injury issue meant he couldn't continue.

The centre-back's frustration was evident as he trudged off the pitch, kicking the dugout at the Estadio Ramon Sanchez Pizjuan.

The extent of Araujo's latest injury is not yet known and he will undergo tests to determine whether he was to return to the treatment table so soon after leaving it.

Having spent a lengthy spell out with injury before returning this month, Pique's substitution in the 67th minute against Sevilla was a worrying sight.

In fact, after Ousmane Dembele's goal in the first half, the defender went over to the bench to tell the Barcelona staff that he was in discomfort.

Despite the evident concerns around the veteran's fitness, he played down the seriousness of any injury after the game.

"They're only little things," Pique clarified.

"We've spoken to the boss about building my match load bit by bit.

"I'm playing more than I expected after so many months out injured.

"I've been able to train a bit and we'd agreed on a schedule."