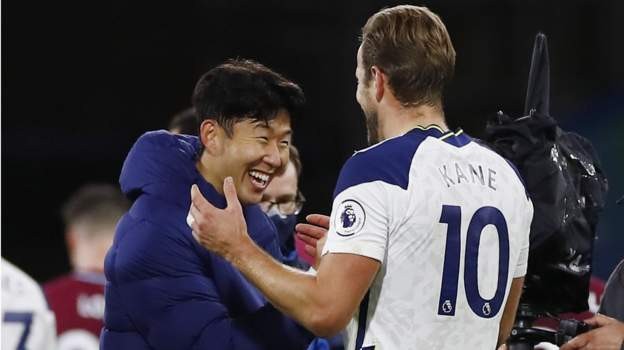 Son and Kane have linked up for four goals against Southampton, two against Manchester United and West Ham and now another against Burnley

Harry Kane believes Tottenham "can do something special" after his brilliant partnership with Son Heung-min gave Spurs a 1-0 Premier League win over Burnley.

Son's header from Kane's flick-on was the ninth time this season they have combined for a Premier League goal - and the 29th time in total.

"It is great," striker Kane told BBC Sport. "Me and Sonny have had a nice little partnership going recently and hopefully it continues.

"I think having more understanding when I'm dropping deep for him to run in behind [is the difference]. It is just confidence as well.

"Even today it was not an amazing assist but it fell well for Sonny."

That takes them into esteemed company as the joint second most prolific combination in Premier League history.

The result takes Spurs up from 11th to fifth in the league, only two points behind leaders Everton. They are also the top scorers in the league with 16 goals from six games.

Son is the individual leading scorer with eight and Kane has been directly involved in 13 goals (five goals and eight assists) - a record for a Premier League player after six games.

So where do Kane and Son rank among the great Premier League duos - and how far can Spurs go this season?

"For three or four years he has played at an incredible level. His pace and intelligence is great and he always seems to have an end product.

"Son and Kane's partnership seems instinctive - one of those things you can't work on. You know where each other will be. There is that instinct where they will attack the ball."

After the game Spurs boss Mourinho shared the credit for their partnership with his predecessor Mauricio Pochettino.

"It is an understanding that comes from Mauricio's time," said Mourinho. "I don't want all the credit myself, let's share with Mauricio. They play together for a long time, probably a different way because Harry is not always a nine now.

"What pleases me more about them both is that they are two top players but close friends, no jealousy, they both play for the team."

Is Kane playing differently now?Harry Kane was crucial at both ends, clearing a header off the line before setting up the winner

Kane has already broken his personal record for assists in a Premier League season with eight. He has another 32 games to add to his record.

He also saved Spurs from going behind when he headed James Tarkowski's effort off the line - but only had four touches in Burnley's box and did not manage a shot on target.

So what has changed?

"When the gaffer came in he said when I drop deep the wingers have to run in behind," Kane said. "It's something I have been doing for a while but I think we are seeing the final product now."

Mourinho told BBC Sport: "In the last minute he was pressing and sliding tackles, trying to stop attacks. When you want to win, you do everything for the team. There is no space for individuals or no space for prima donnas, Harry has this spirit and he is fantastic.

"He has done amazing with every coach here. The way the team plays, he is very comfortable because he is good in the box and also magnificent outside the box."

Osman said: "It's the way football seems to be going, a lot of goals with strikers playing on the shoulder and using pace.

"Harry Kane doesn't have that blistering pace so started to drop deeper to be unselfish and create opportunities. His goals tally won't suffer but he has added a lot more to his game.

"Look at Alan Shearer, he was a very dynamic striker in his younger days and then changed to a striker holding the ball and attacking crosses as he got older."

Burnley boss Sean Dyche said: "I think he [Kane] has had better nights to be fair. He is a top player and top players do the right things and make the right decisions."

Is this Tottenham's season?

Pochettino did a great job during his time with Spurs but failed to lead them to silverware - and never really recovered from their Champions League final defeat by Liverpool.

So could they really win the league?

Football journalist Rory Smith said on BBC Radio 5 Live: "If a team like Everton or Spurs can keep churning results out they stand a chance because those elite teams need all cogs of the engine working.

"There will be more days when the big teams aren't firing because of the situation [caused by the coronavirus pandemic] and if these teams keep chugging away there will be chances in a way there wouldn't be in a normal season.

"When Leicester won the Premier League, a lot of things happened to make that happen and it feels like that might be happening again."

Kane added: "We know with the team we have got and the players we have got we can do something special.

"It's still early on [to talk about a title challenge]. We need to take each game as it comes. I know it's a cliche but we still have a lot to learn and build on but I think nights like this will give us a lot of confidence.

"These are the games you need three points if you are going to be up there at the end of the season."

Halloween and pumpkins: How can you make the most of them?Children in Need: Find out you can get involved and make a difference