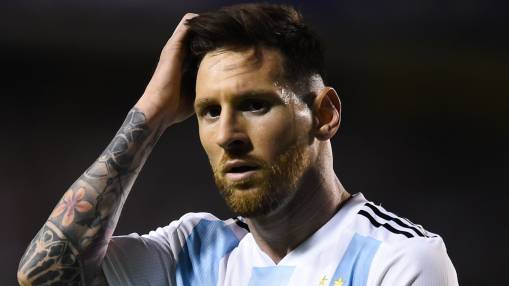 Argentina have cancelled their final World Cup warm-up match against Israel that had been scheduled for Saturday, federation officials and players said on Tuesday.

The game had been a subject of controversy as it was set to be played in the Jerusalem neighborhood of Malha, which is situated on the site of a former Palestinian village destroyed during the war that established Israel 70 years ago.

The move comes in the wake of Palestinian Football Federation chief Jibril Rajoub calling on Arab and Muslim fans to burn photos and T-shirts of Argentina superstar Lionel Messi if he attended the game.

Argentine Football Association vice president Hugo Moyano said threats to the team as they trained in Barcelona were affecting the players' families. On Tuesday, a group of Catalan pro-Palestinian protesters called out the names of the players and asked them not to participate in the "cover-up" of a social conflict. Photos on social media showed an Argentina shirt stained in "blood."

"I think it's a good thing that the match between Argentina and Israel was suspended," Moyano told Radio 10. "The right thing was done, it's not worth it. The stuff that happens in those places, where they kill so many people, as a human being you can't accept that in any way. The players' families were suffering due to the threats."

The Israel and Argentina federations had yet to formally announce the game's cancellation as of Tuesday night.

Reports in Israel said Israeli Prime Minister Benjamin Netanyahu had called Argentinian President Mauricio Macri to ask him to persuade the team not to cancel their visit, but Israel Radio quoted an unnamed diplomatic official who said the chances of salvaging the fixture were very slim.

Rajoub wrote to Claudio Tapia, the head of Argentina's FA, last week accusing Israel of using the match as a "political tool."

The match was originally slated to be played in Haifa but Israeli authorities contributed funding for it to be moved to Jerusalem, angering Palestinians further following U.S. President Donald Trump's recognition of the city as Israel's capital.

Palestinian authorities said in May that more than 50 people were killed by the Israeli military in Palestinian protests along the Gaza border as the U.S. opened its new embassy in Jerusalem.

Palestinians celebrated the game's cancellation. In Gaza, people cheered and in Ramallah in the West Bank, the Palestinian FA issued a statement thanking Messi and his colleagues for cancelling the game, saying: "The Palestinian FA thanks Argentina's players led by star Messi for refusing to be used to serve a non-sporting goal."

"I congratulate Palestine at such a great sport victory and the tough blow to the occupation," Abdel-Salam Haniyeh, member of the Palestinian higher council of youth and sport, wrote on Facebook after news of the cancellation broke.

"We thank all liberals among sport people and all those who stood by us to demand the cancellation of the match between Argentina and the occupation in Jerusalem."

The match at the Teddy Kollek Stadium was to be Argentina's final game before they kick off their World Cup campaign in Russia against Iceland on June 16.

Information from The Associated Press and Reuters was used in this report.