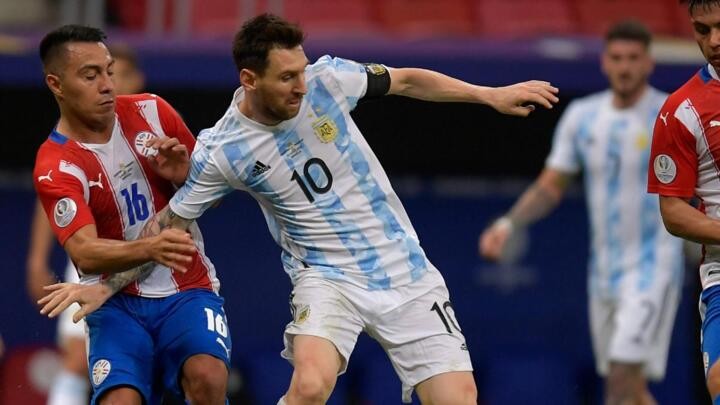 Lionel Scaloni reflected on Argentina's 1-0 win over Paraguay in Brasilia on Monday.

Argentina head coach Lionel Scaloni voiced concerns about the physical condition of his players while highlighting the importance of Lionel Messi after La Albiceleste booked their spot in the Copa America quarter-finals.

Papu Gomez was the hero for Argentina, with his 10th-minute goal sealing a 1-0 win over Paraguay on Monday and a spot in the last eight of the showpiece CONMEBOL tournament.

There was no rest for superstar captain Messi, who equalled Javier Mascherano's record for most Argentina appearances with his 147th cap, despite Scaloni's men backing up from Friday's success against Uruguay.

Messi has not missed a minute of Argentina's three Group A games so far, amassing 74 touches against Paraguay while winning 75 per cent of a team-high 16 duels.

The six-time Ballon d'Or winner had the most shots (three) and shots on target (two) among his team-mates as Argentina extended their unbeaten streak to 16 matches, dating back to 2019.

"The reality is that Messi has been playing every game and it is very difficult not to count on him, even though he is tired he continues to make the difference," said Scaloni, who introduced the likes of Angel Di Maria and Sergio Aguero into the starting XI.

"Today we made several changes and despite that we were able to take all three points."

Without a major title since the 1993 Copa America, Argentina snapped a four-game winless drought against Paraguay in Brasilia.

Argentina ended the contest with a total of eight shots (five from outside the box) – their second lowest figure during the Scaloni era, tied with the match against Ecuador in October 2020 and one more than they registered against Paraguay at the 2019 Copa America.

Paraguay controlled possession across the 90 minutes – 56.9 to 43.1 per cent, the first time in the last nine meetings with Argentina they had more ball possession.

"What worries me is the physical condition of the players because we came from playing three days ago and today the conditions were not the best, so we had to rotate players," Scaloni told reporters.

"The first half we played very well and in the second, due to the merit of Paraguay and their good physical condition, as a result of many days off, they had more control of the game. The team showed a good image in the first half, but there are always things to keep improving."