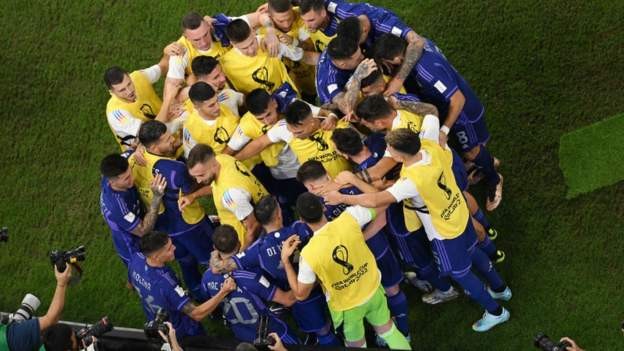 Argentina completed the turnaround from the shock opening World Cup loss to Saudi Arabia by qualifying for the last 16 in impressive style against Poland - who went through on goal difference having finished level on points with Mexico.

Lionel Messi was the catalyst for the crucial win against Mexico that got Argentina's campaign back on track, and he was instrumental again as they illustrated why they were regarded as one of the tournament favourites to set up a second-round match against Australia.

Poland were set to progress by virtue of the Fifa Fair Play rule for having fewer yellow cards than Mexico - until Saudi Arabia pulled one back deep into stoppage time in their 2-1 loss to the Concacaf side. The Poles will now face France after surviving an incredibly dramatic finale in which another goal for Argentina or Mexico would have knocked them out.

Argentina ran out comfortable winners with second-half goals from Brighton's Alexis Mac Allister and Manchester City striker Julian Alvarez, but the game still held real drama and jeopardy in the closing stages as Poland knew another goal conceded, or another goal for Mexico against the Saudis, would send them out on goal difference.

Argentina dominated throughout but had to wait until after the second half to make the breakthrough as Messi had a first-half penalty saved by Poland keeper Wojciech Szczesny after the pair collided in an aerial challenge, a harsh award after a video assistant referee consultation.

Mac Allister gave Argentina the lead they deserved when he swept home Nahuel Molina's cross a minute after the break and Alvarez sealed victory with a fine finish into the top corner in the 67th minute.

Argentina's improvement continued as they produced their best performance of the World Cup to outclass a disappointing Poland.

The Argentines shook off the shock of that stunning loss to Saudi Arabia to settle their nerves with a Messi-inspired win against Mexico then stepped up to another level to confirm a last-16 game against Australia.

Messi's first-half penalty miss was a minor interruption on their path to victory as they held complete command of territory and possession against a passive Poland, especially given what was at stake.

Argentina keeper Emi Martinez did not have a moment of anxiety and once Mac Allister put them ahead the game was virtually over, Alvarez confirming it with a superb strike past the excellent Szczesny that hinted at his own rich potential.

Messi showed flashes of his mercurial best but this was a complete performance from Argentina who played with greater intensity and fire than they have so far.

They have taken their time to show why they are so highly regarded but produced plenty of evidence here to illustrate just how dangerous they will be in the knockout stage.

It was symbolic of this lacklustre Poland performance that their greatest show of passion all night came after the game had finished when they punched the air as news of Saudi Arabia's goal against Mexico that confirmed their place in the last 16 filtered down on to the pitch.

Poland's players revelled in the good tidings as they waved red and white flags on the pitch, barely able to believe they were through to face France.

They can consider themselves fortunate to be there after this poor performance in which they never troubled Argentina and the great striker Robert Lewandowski did not receive any service worthy of the name.

One exception to the mediocre fare from the rest of his colleagues was former Arsenal goalkeeper Szczesny, who was magnificent throughout, saving Messi's penalty and producing other stops in a faultless display.

Poland are through and enjoyed their celebration but they will have to step up several levels to trouble France.

Lionel Messi (Argentina) wins a free kick in the attacking half.

Attempt blocked. Nicolás Tagliafico (Argentina) left footed shot from the centre of the box is blocked. Assisted by Thiago Almada.

Piotr Zielinski (Poland) wins a free kick in the defensive half.

Attempt missed. Lautaro Martínez (Argentina) right footed shot from the right side of the box misses to the left.

Michal Skóras (Poland) wins a free kick in the defensive half.

Grzegorz Krychowiak (Poland) is shown the yellow card for a bad foul.

Alexis Mac Allister (Argentina) wins a free kick in the defensive half.

Attempt missed. Julián Álvarez (Argentina) right footed shot from the right side of the box is close, but misses to the right. Assisted by Lionel Messi with a through ball.