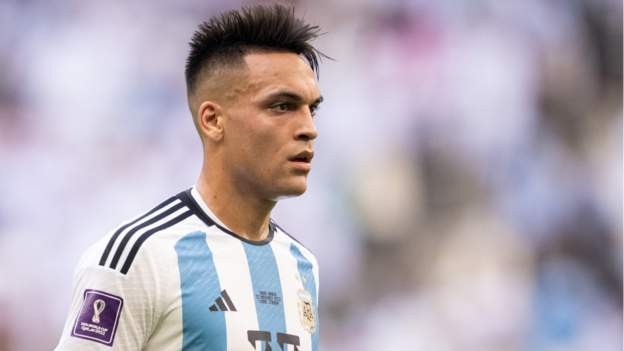 Argentina forward Lautaro Martinez says his side's second World Cup group match against Mexico will be "like a final" after they lost their opener to Saudi Arabia.

Anything other than a victory against Mexico could leave their hopes of qualifying for the last 16 hanging by a thread.

"It could define our faith in this World Cup," said Martinez.

Lionel Messi opened the scoring from the penalty spot but Saudi Arabia came from behind after Argentina had three goals ruled out for offside.

"It was a heavy blow to our morale, but we are a strong group that is very united," said Martinez.

"We need to stay calm, recover and think about what's coming. What's coming is Mexico, so we have to focus on getting the win no matter what.

"We are very optimistic and I think we lost because of small details, due to our own mistakes. We have studied our next rival and I think we are ready."

Argentina manager Lionel Scaloni said Messi is fit, despite reports of a possible ankle injury, and that his squad will come back from their opening defeat.

"When you are knocked out you have to get up, and my players are more than capable of doing so," Scaloni added.

"We will not change the way we play because of the loss to Saudi Arabia. I can make a change or two in the selection but not in our system, that is not in question.

"This group will leave everything they've got on the pitch to recover from that heavy blow."

Mexico have reached the knockout stage at the past eight World Cups, but manager Gerardo Martino said his side were disappointed to only take a point against Poland - even though they were indebted to veteran goalkeeper Guillermo Ochoa for saving a Robert Lewandowski penalty.

"I think we could have had a better result against Poland so we need to analyse things beyond the result," said Martino, who coached Messi during a brief stint at Barcelona.

"We have to think Messi will show his best version. Sometimes even without being on top of your game for 90 minutes, in five minutes everything can happen."

I am co-commentating on this game and it is kind of unthinkable for Lionel Messi, in possibly his last World Cup, to be going out in the group stage after two games.

It could happen, but I don't think it will. Mexico did not offer much against a poor Poland side and I feel like sheer desperation will drag Argentina to the win they need.

Lionel Messi has scored in his past five appearances for Argentina - only once has he scored in six in a row, doing so between November 2011 and September 2012.Mexico have failed to score in their past three World Cup matches, but they have never drawn a blank in four straight games at the tournament.Following their 2-1 defeat by Saudi Arabia, Argentina are looking to avoid losing both of their first two games at a World Cup for the first time.Argentina have lost four of their last six World Cup matches having, as many as they had in their previous 25 in the competition.Mexico have lost all three of their World Cup games against Argentina.Argentina are unbeaten in their past 10 meetings with Mexico, having won seven and drawn three.