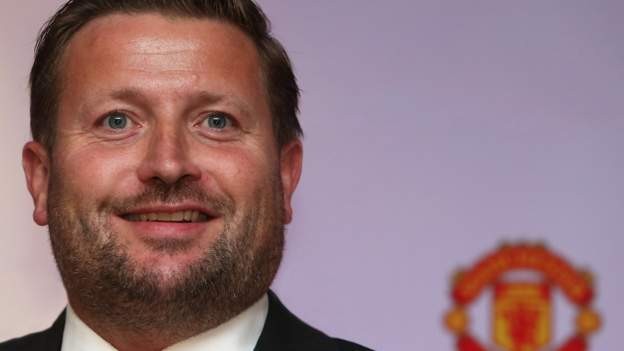 Incoming Manchester United chief executive Richard Arnold faces "a tough job and a big job compared to any other in football" according to one of his predecessors.

Peter Kenyon - who ran the club between 2000 and 2003 - told BBC podcast The Sports Desk that managing director Arnold "has to be given time."

"The pressures will come on getting United re-established on the field to where it should be," he said.

"Whether he's directly involved, he's now responsible for overseeing that.

"And that's about getting the right football structure in place that will deliver results consistently."

'He knows huge mistakes were made' - assessing Woodward's reign

Having joined United in 2007, Arnold will on 1 February replace Ed Woodward, who is standing down after a tenure defined by unsuccessful managerial appointments and a series of expensive mistakes in the transfer market.

Having advised the Glazer family on their highly controversial leveraged buyout of the club in 2005, former banker Woodward was promoted to executive vice-chairman in 2013 when the club won the last of its 20 league titles. But with legendary former manager Sir Alex Ferguson retiring shortly after Woodward's appointment, United have since suffered a dramatic decline, despite spending more than a billion pounds on players.

Woodward resigned last year amid the fallout from the botched European Super League (ESL) project, with his close friend and colleague Arnold handed the task of restoring the club's fortunes.

"There'll be a lot of people telling Ed what a failure he's been," said Kenyon, who controversially left Old Trafford to join rivals Chelsea in 2003. "Most of those people have never been in [his] position. It's tough, and what Ed oversaw was huge change, because of Sir Alex Ferguson.

"You should never underestimate his [Ferguson's] role within the club and there was a lot of things that happened when he went. Everyone can be smart after the event, and perhaps they should have spent more time on the preparation post-Alex.

"But it's hard to understand what you have to fill until the gaps appear.

"I wish Richard all the very best because it's a tough job.

"It does have a stature, not just in the Premier League but globally, and we're in an industry where everyone knows how to do it better than you."

Arnold has been in charge of day-to-day operations at Old Trafford and is widely credited with building bridges with United's major fan groups since scrutiny of the Glazers intensified following the ESL fiasco. In his previous role as commercial director, he was viewed as one of the biggest influences behind the club's growth in revenue.

However, he also caused controversy in 2020 when he proudly told investors how the shock signing of Nigerian striker Odion Ighalo had been trending worldwide on social media, with some fans suggesting it showed he was out of touch with their priorities.

"It's too easy to write people off, and the benefit is he doesn't have to learn about United," said Kenyon.

"Richard's years with the club will be beneficial, but he'll obviously want to stamp his own characteristics on the way going forward.

"He's done an incredible job on the commercial side of the club.

"The issue is you can't forget the core product, and that's football."

While revenue has tripled during the Glazer's 17-year ownership, more than a billion pounds has also been spent on interest, debt repayments and dividends.

"It's still financially in a good place," insists Kenyon. "Whether you like the ownership group or not, they're stable.

"They're talking about revamping the stadium which is a great thing to do so I think the most important thing now is move forward. What it's got to do now is rally around. Get a plan for the next few years - not the next few months."

Hailed by co-owner Joel Glazer as the start of "a new phase in the club's evolution", Arnold has attended United fan forums and is co-chair of a new fans' advisory board.

"In the dealings we've had with Arnold, there's been a willingness to engage and to take advice on board," he told The Sports Desk.

"Do I believe that they want to put a different model in place, where supporters are far more central to the club, where their views are taken into account? I believe that process has already started and we have seen progress already.

"At present it's just dialogue but I believe it's going in the right direction."

Amazing ways to overcome road rage: Enter the happy place of Zen MotoringAwkward questions and emotional confrontations: Meeting your ex for dinner - what could go wrong?