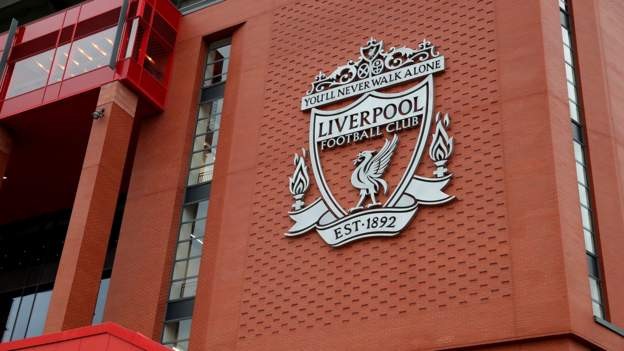 The Premier League match against Chelsea at Anfield ended goalless

One was arrested inside Anfield and two outside the ground for three separate incidents on Saturday.

The men, aged 23, 37 and 49, were arrested on suspicion of homophobic intentional harassment, alarm or distress.

The 37-year-old has been bailed pending further enquiries, and the other two men will attend a voluntary interview.

The Premier League match ended in a goalless draw.

The Football Association (FA) can now charge clubs if their fans use a homophobic chant that has been aimed at Chelsea players and supporters.

In January 2022, the Crown Prosecution Service (CPS) classed the chant as a homophobic slur and said fans singing it during matches were committing a hate crime.

The chant has allegedly been sung by Manchester City and Nottingham Forest fans in recent matches against Chelsea, while Manchester United fans also allegedly directed the chant at then Everton boss Frank Lampard during their FA Cup match over his links to the Blues.

Earlier this month the FA wrote to all clubs across the Premier League, English Football League, National League, Women's Super League, Women's Championship and steps two to four of the pyramid to remind them it can "pursue formal disciplinary action against any club whose supporters engage in discriminatory behaviour", which now includes this chant.

Writing in his programme notes for the Chelsea game, Reds boss Jurgen Klopp praised Liverpool fans for trying to stop the derogatory chant that he said "does not fit in with the traits of our city, our club or our people".

"I will not refer to it by name in this column because I think the less we can hear about it and see it the better," he said. "But the really, really positive thing is that fans have come together to try to make it a thing of the past."

Visit our Liverpool page for all the latest Reds news, analysis and fan viewsYou can now get Liverpool news notifications in the BBC Sport app - find out morePodcast: The Red Kop - listen to the latest episode on BBC Sounds