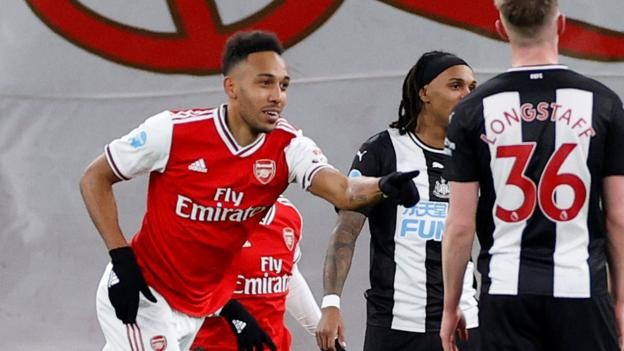 Aubameyang's goal was his 15th league goal of the season, in his 24th outing

Arsenal picked up just their seventh Premier League victory of the season with a quick-fire second-half double to break Newcastle's resistance at Emirates Stadium.

The Gunners have been the division's draw specialists this campaign having been held 13 times and it looked to be going the same way after a goalless first-half.

But the hosts sprung into action immediately after the restart with Eddie Nketiah's no-look strike from Nicolas Pepe's cutback clipping the top of the crossbar.

Mesut Ozil poked in a third late on from substitute Alexandre Lacazette's pass and the Frenchman converted a fourth in injury-time.

Newcastle attempted to play further forward after conceding but were restricted to few opportunities - the dangerous Allan Saint-Maximin coming closest with a curling strike that rattled the post.

Arsenal's win moves them up into the top half of the table in 10th place - six points behind north London rivals Tottenham, who claimed a last-gasp winner over Aston Villa to go fifth.