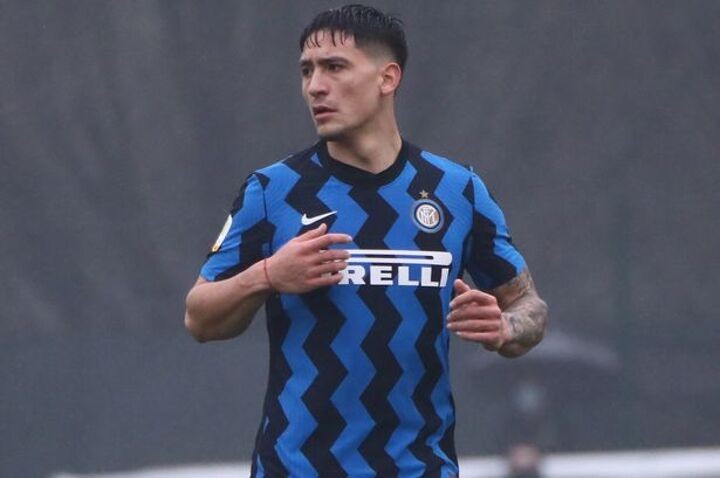 Inter Milan prospect Martin Satriano admits he is "flattered" by recent transfer speculation linking him with a move to the Premier League.

Arsenal and Chelsea are believed to be monitoring the 20-year-old Uruguayan, who left his homeland to join Inter in January 2020.

Satriano has been in fine form this season with six goals in 10 appearances up front for Inter's youth side.

Though he is yet to make his senior debut, Inter boss Antonio Conte named him on the bench for three Serie A games earlier this season.

Satriano is fully aware of recent rumours over his future and would be keen to play in the Premier League one day.

But he insisted he is focussed on performing for Inter when quizzed on his links with Arsenal and Chelsea by the  Daily Mail  .

"It is always flattering, yes. It is a sign that I am doing things well and that I have to continue down that path," said Satriano. "I try to use it as an incentive to keep working and be better every day.

"It is a very competitive league where any team can beat anyone. But for now I am totally focused on Inter and to do the best with them."

Satriano has been training with the senior set-up and has relished the chance to learn from top marksmen Romelu Lukaku and Lautaro Martinez.

He added: "The truth is that training with the first team is something that I really enjoy.

"Training with top-level players every day is something very nice, which helps me a lot to improve my game, since I train at a very high intensity and with great players.

"Sharing the pitch with players like Lautaro and Romelu is something very good as today they are the best forwards in Serie A and among the best in the world.

"I always try to look at them, listen to them and try to do all the good things they do on the pitch."