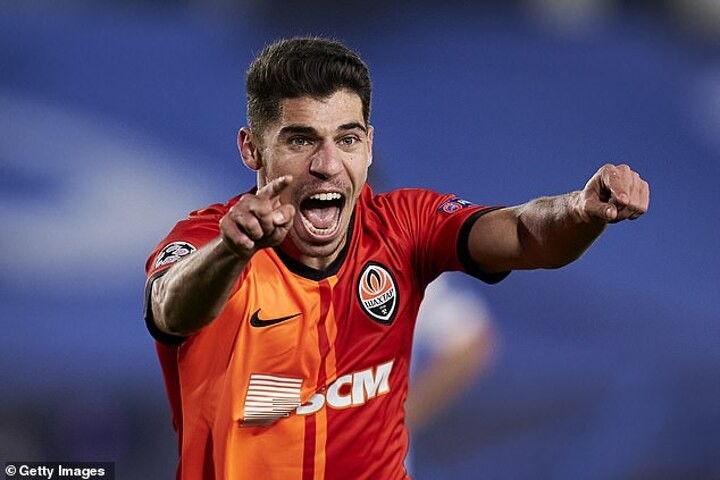 Forget the January transfer window, Arsenal have already started planning for the summer by lining up an offer for Shakhtar Donetsk winger Manor Solomon.

The 21-year-old forward has emerged as hot property following a successful spell in the Ukrainian top flight over the past two seasons.

Solomon has previously found himself on Manchester City's radar - claiming he met with City representatives to negotiate a fee during his time at Israeli side Maccabi Petah Tikva in 2017, but a deal never materialised.

Subsequently, Arsenal have made initial moves for Solomon - entering into preliminary discussions with the player's entourage after scouting him heavily over the last year.

With Arsenal likely to secure a deal with the 21-year-old, Sportsmail have created a player profile, outlining everything you need to know about the emerging talent.

Who is Manor Solomon?

Manor Solomon is the 21-year-old forward Pep Guardiola had intended to sign in 2017, before his old side in Israel doubled their asking price.

City had hoped to sign Solomon for £5million after catching their attention in his opening season at Maccabi Petah Tikva.

He scored several goals for the club before City tabled their offer. However, the Citizens pulled out of the transfer race when Maccabi demanded £10m due to the prestige of the Premier League club.

As a result, Shakhtar Donetsk snapped the forward up at the midway point of the 2019 season - a move that City lived to regret.

During the 2019-2020 campaign Solomon scored 11 goals for his club. One of those goals came against Manchester City in the Champions League.

Solomon also found the back of the net in two fixtures against Real Madrid, establishing himself as a real target for clubs across Europe.

Why do Arsenal want Solomon?

Solomon is regarded as hot property for several reasons. He is a young, versatile player that radiates energy when on the ball.

Despite his young age he has experienced top-flight football – making plenty of appearances in the Champions League – and could bring a new and dynamic threat to Arsenal's attack.

Solomon would be a long-term investment for Arsenal should they attain his signature. Arteta would look to develop the youngster at the Emirates and prepare him to succeed Nicolas Pepe and Willian.

Acquiring Solomon's services would be a proactive decision from the Arsenal manager as he is 11 years Willian's junior.

What is Solomon's style of play?

Solomon is unlike any player in Arteta's current side. He prides himself on his flair and is the sort of player that takes 1-v-1's in his stride.

One of Solomon's key strengths is his ability to dribble with the ball and take on opponents. Solomon's technical quality allows him to occupy threatening positions and pose an imminent threat on goal.

His style of play is raw, unrefined and may need some attention, but the youngster is guaranteed to provide the Gunners with plenty of step-overs, heel flicks and left to right drags.

Much like any youngster looking to enter the most competitive league in the world, there are some elements he will need to work on.

Although Solomon is an excellent dribbler that is bound to take on players, the timing of his final pass can sometimes be too late - a trait that can be frustrating but easily fixed with the right coach.

In addition, Solomon's height may prove to be a challenge in one of the most physical leagues in the world.

Nevertheless, Solomon is a player with superb technical ability that could flourish in the Premier League if given the right attention.

What is Solomon's best position?

Given the nature of his direct and attacking style, Solomon's best position is on the flanks.

Solomon has made the majority of his appearances on the left-hand side of the midfield. Although, given his ability to strike from either foot, Solomon can be utilised on either flank.

Solomon does, however, have the tendency to creep infield when he is not receiving enough of the ball out wide - something which frustrates those playing around him.

Arsenal are not alone in their quest for Solomon's signature. The Gunners will have to fend off several suitors to land a deal with the youngster.

Atalanta have already tabled a £17m bid for him but found their offer was rejected. It is yet to be determined if they will return with a higher number.

Leeds United are also among those vying for Solomon's signature as they look to cement their place in the Premier League.

It is believed Shakhtar's valuation of the player has increased rapidly since Arsenal's interest.

When does Solomon's contract expire?

Arsenal's potential transfer swoop for Solomon will come at a severe price as the youngster is under contract at Shakhtar until December 2023.

As a result, it is believed the Gunners will hold off until the summer to try and acquire the forward for a marginally discounted rate.

Following the coronavirus pandemic's financial ramifications, Arsenal will also have to free up the funds for Solomon by making a series of departures.