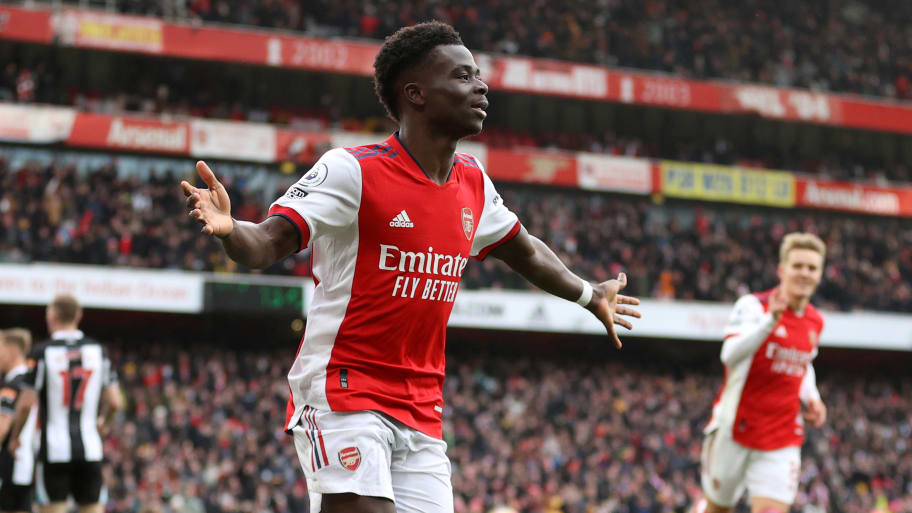 Arsenal are sweating on the fitness of winger Bukayo Saka ahead of facing Manchester United in the Premier League on Thursday night.

Saka complained of a thigh problem during Saturday’s win over Newcastle and only lasted 64 minutes of the contest, having already scored to contribute to the victory.

The 20-year-old has started 12 of the Gunners’ 13 Premier League games so far this season, coming on as substitute on the opening day clash with Brentford as it was just five weeks after he had played in the Euro 2020 final with England.

That would make his potential absence against United a blow. But the Daily Mail writes that Arsenal are at least ‘optimistic’ that the injury is nothing major and consider his withdrawal against Newcastle to have just been a ‘precautionary’ measure.

Saka will continue to assessed in the days ahead of the trip to Old Trafford.

Of the XI that started against Newcastle, only Pierre-Emerick Aubameyang (30) and Thomas Partey (28) were older than 23.

“If you trust them, then you have to trust them and it gives them confidence even after in difficult moments,” the boss reflected after that match, via Arsenal.com.

“If not, it’s not real, trust me. They were given another chance and they’ve done it because they showed during [last] week how hurting they were after that defeat [against Liverpool] and how willing they were to put it right.”

This article was originally published on 90min as Arsenal assessing Bukayo Saka injury ahead of Man Utd clash.