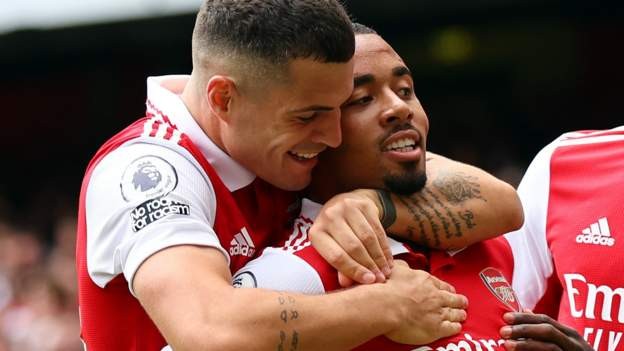 Arsenal maintained their position at the Premier League summit as an outstanding display overpowered Tottenham in the north London derby at Emirates Stadium.

Mikel Arteta's side were superior throughout and Spurs' cause was not helped by Emerson Royal's red card for a second-half foul on Gabriel Martinelli.

Arsenal made a fast start and took a deserved lead when Thomas Partey side-footed a precise finish into the top corner from 25 yards after 20 minutes.

Spurs were handed a lifeline before the break when Gabriel's foul on Richarlison gave Harry Kane the opportunity to score his 14th goal in 18 derby games and his 100th goal away from home in the Premier League from the penalty spot.

Conte was attempting to make three changes when Granit Xhaka effectively ended the contest with a low finish past Lloris from inside the area.

Arsenal's outstanding start to the season, aided by some smart work in the transfer market in the summer, has raised hopes that they might be coming out of a long period of post-Arsene Wenger transition.

The Gunners were bitterly disappointed to miss out on Champions League football on the final day of last season but there is an energy, verve and threat about Arsenal that suggests they can make a serious impact in this campaign.

Even in defeat at Manchester United last month, Arsenal showed signs of maturity and progress, emphasised here by the manner of their victory over the old rivals.

Arsenal flew out of the blocks to take the lead and even recovered from the frustration of handing an out-of-sorts Spurs a route back into the game via Gabriel's challenge on Richarlison.

Jesus has proved to be a superb signing, while William Saliba has been outstanding in central defence since returning from loan spells at St Etienne, Nice and Marseille.

There is still work to be done but Arsenal look like a club and a team who finally have a clear direction again, a mouth-watering mix of younger players and experience that bodes well for the future.

Arsenal's next game, here against Liverpool next Sunday, will be another significant test but there is growing confidence around Emirates Stadium.

Spurs may argue over the merits of Emerson Royal's red card but it was a poor challenge in a position where he actually had no need to engage with Martinelli. Spurs manager Conte was instantly infuriated by the challenge itself although he was clearly not expecting the punishment that followed.

Conte's side have not been pleasing on the eye this season but they have been digging out results until this first Premier League defeat of the campaign.

Spurs had a spell of threat after Kane's penalty, and indeed the game's first big chance when Arsenal keeper Aaron Ramsdale blocked Richarlison, but they were lacklustre and dominated in all areas.

There was no coming back after the sort of inexplicable mistake Lloris, for all his big reputation, can be guilty of committing, and Royal's red card only pushed any prospect of even a point further into the distance.

Kane and Son Heung-min, who was later substituted along with Richarlison - Conte was trying to make three changes when Xhaka scored Arsenal's third - could not get into the game.

Spurs were well beaten long before the end, Conte cut a resigned figure in his technical area and this was another miserable north London derby away day for manager, player and supporters.

Attempt missed. Gabriel Martinelli (Arsenal) right footed shot from a difficult angle and long range on the left is just a bit too high from a direct free kick.

Eric Dier (Tottenham Hotspur) is shown the yellow card for a bad foul.

Eddie Nketiah (Arsenal) wins a free kick in the attacking half.

Attempt blocked. Fábio Vieira (Arsenal) left footed shot from the centre of the box is blocked.

Attempt saved. Kieran Tierney (Arsenal) left footed shot from outside the box is saved in the bottom right corner. Assisted by Fábio Vieira.

Gabriel Martinelli (Arsenal) is shown the yellow card for a bad foul.

Matt Doherty (Tottenham Hotspur) wins a free kick in the defensive half.

William Saliba (Arsenal) is shown the yellow card for a bad foul.