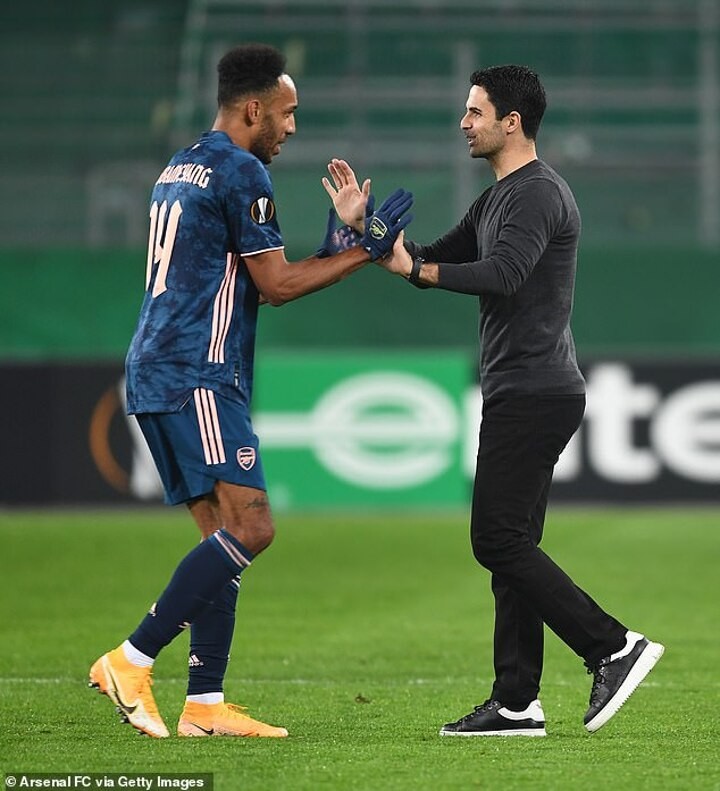 Mikel Arteta says criticism should not come as a surprise to Pierre-Emerick Aubameyang because of the standards he has set.

Aubameyang appeared to hit back at his doubters after coming under fire for a goal and even shot-shy period since signing his bumper new contract worth potentially over £350,000-per-week last month.

'A lot of bla bla bla. At the end, we speak as usual,' Arsenal's captain posted on social media this week.

Aubameyang then delivered the perfect answer on the pitch, coming off the bench to score Arsenal's Europa League winner against Rapid Vienna on Thursday night.

Manager Arteta said: 'No [I'm not surprised by the criticism] because expectations for him are that he has to score a goal every game so this comes with the nature of the big player that he is, what he has done in the past.

'People expect that from him in the future. We are here to help him with that, and we will support him when difficult times come around him.'

Before Thursday, Aubameyang's only previous competitive goal had come on the opening day at Fulham.

But he looked much more threatening in Austria, having as many attempts on goal in his 30 minute cameo as he had managed in his previous four games combined.

'[In Vienna] he was promising. I said to him before the game, go out and win us the game, and he did it.'

Arteta is also braced for the inevitable conjecture about Aubameyang's best position whenever he hits a dry spell.