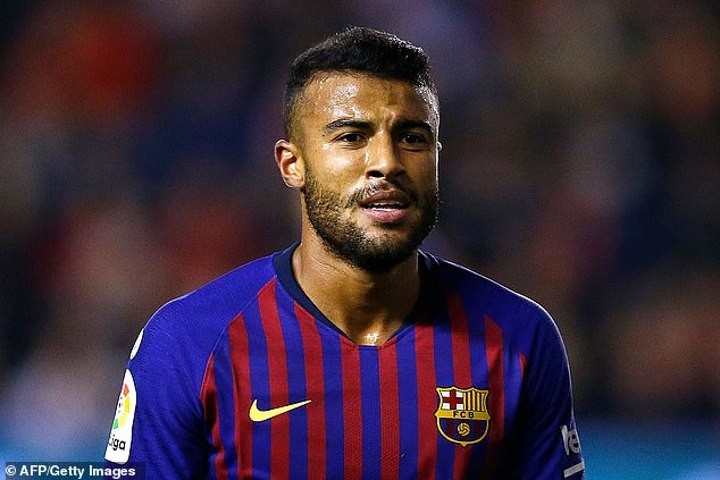 Arsenal are monitoring the situation of Barcelona midfielder Rafinha, according to reports in Spain.

The Brazilian, 27, is currently on loan at fellow Spanish side Celta Vigo and could be available on the market for around £13million.

And Mundo Deportivo believe that the Gunners are one of three European teams looking to prize him away from the Camp Nou this year.

The same publications says the La Liga giants are reportedly looking to offload several of their stars this summer due to financial strains caused by the coronavirus pandemic.

Only captain Lionel Messi and goalkeeper Marc-Andre Ter Stegen are guaranteed of a spot in the Barcelona squad for the 2020-21 season, with the rest of the playing squad up for auction.

This means Rafinha, who has made 22 league appearances and scored twice for Celta so far this season, is likely to be moved on when the transfer window reopens in Europe.

According to Mundo, Arsenal stand in good stead to make a deal with Barcelona for Rafinha due to good contacts between the Catalan club and the Arsenal board.

The Gunners have former Barcelona director Raul Sanllehi as their Head of Football Operations which increases the chances of successful negotiations between the two parties.

Celta Vigo have the option to buy the Brazilian international for £13million once his loan deal expires, but Inter Milan, as well as the Gunners, are keen on Rafinha's signature.

The Serie A club could be boosted by Barcelona's interest in their Argentinian forward Lautaro Martinez, with Rafinha being discussed as the subject of a player-plus-cash deal from the Catalan club for the striker.

Rafinha spent the second-half of the 2017/18 season at the San Siro but the Italian giants turned down the opportunity to sign the Brazilian on a permament deal for €35million.

Mikel Arteta's Arsenal could be targeting a new midfielder later this year with the future of on-loan Real Madrid midfielder Dani Ceballos clouded in serious doubt.

The Gunners are set to return to competitive action in June when the Premier League kicks off again after being suspended due to the coronavirus pandemic.

Their first game back is set to be a visit to Pep Guardiola's Manchester City on June 17.