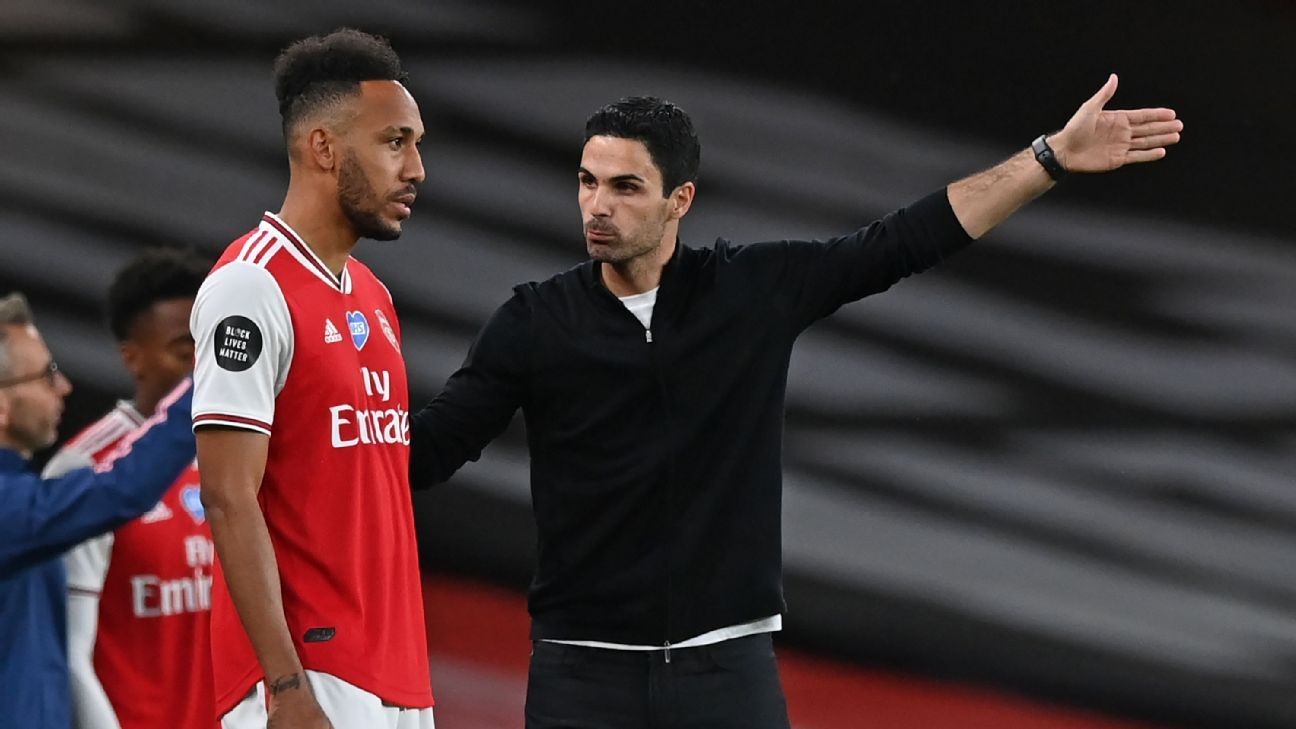 When Arsenal's decision-makers met to determine Pierre-Emerick Aubameyang's fate in January, they made a judgement call far bigger than whether or not to release their star striker. In head coach Mikel Arteta's opinion, Aubameyang's attitude around the Premier League club's London Colney training base had become a significant problem.

Aubameyang (who retired from Gabon duties last week) has always had a reputation for bending the rules -- turning up a few minutes late for a team meeting here, missing a squad-wide prematch COVID-19 test there -- but the combination of his consistent goal return and infectious personality always kept him on the right side of every coaching staff he has played under. That was until he was guilty of one indiscretion too many. Sources insist there was no big bust-up or one particularly egregious breach of the rules, but the catalyst for Aubameyang's departure to Barcelona was that Arteta felt his behaviour was threatening the cultural reset he is intent on delivering.

The gamble was that by jettisoning a player with 92 goals in 163 matches for the club, albeit one in the midst of a goal-scoring slump, Arsenal knew they were weakening a young group not flush with goal-scoring options.

Sources have repeatedly told ESPN throughout the season that Arsenal's expectation in 2021-22 was to return to European football and push for the Champions League in 2022-23. This is in part because of the scale of the rebuild taking place, featuring a ruthless cull of a once-bloated squad, paying peripheral or troublesome players to leave while shipping others out on loan. Yet by the end of January, Champions League football was within their grasp, and so Aubameyang's situation asked a larger, more existential question of Arsenal.

A compromise was not impossible. Diego Costa and Antonio Conte famously fell out during the winter window of the 2016-17 season at Chelsea as the striker eyed a lucrative move to China, but the pair parked their differences until the end of the season and together they became Premier League champions. However, Arteta felt the work he had done at Arsenal in creating a more professional environment would be compromised by continuing to make an exception for Aubameyang, who had been club captain prior to being stripped of the role in December, a consideration that outweighed the contribution he could make in the second half of the campaign.

Arteta felt able to work with Pierre-Emerick, not Aubameyang. The latter was, in the manager's view, now the dominant personality. So when the opportunity came to ship him out late in the window, Arsenal acted quickly, paying up a large portion of his large contract in the process.

It was a big call, one compounded by a reluctance to rush into signing a replacement with no preferred option available. Instead, Arsenal pushed on in streamlining the squad to reflect the one-game-a-week programme ahead for the rest of the season, leaving their Champions League bid in the hands of a small, inexperienced squad.

On March 15, Spurs were six points behind fourth-placed Arsenal having played a game more, but a run of six defeats from the Gunners' final 12 games points to a squad that ran out of steam. Even with three games left, Arsenal had an advantage but surrendered it after poor defeats to Tottenham and Newcastle. On Sunday, needing north London rivals Tottenham to lose to Norwich, they were pipped by two points on the final day of the Premier League season despite a 5-1 win over Everton.

After finishing fifth and dropping into the Europa League, Arteta, who signed a new contract a few weeks ago, continues to believe Arsenal are on the right track. But analysing that assessment is where the inquest begins.

So, did they blow it? Or is Arteta right when he suggested Arsenal exceeded expectations this season, climbing three places in the table from last year, earning eight points more, while reshaping the squad in a manner providing foundations for future success?

Mikel Arteta made a tough choice to move on Pierre-Emerick Aubameyang after the January window. Photo by SHAUN BOTTERILL/POOL/AFP via Getty Images

Arsenal's internal planning mapped out qualification for European competition this season and a push for the top four in 2022-23. That is a calculation that will be tested this summer with Liverpool and Manchester City standing apart from the rest, Chelsea under new ownership, Manchester United under new management, Tottenham possessing the lure of Champions League football and Newcastle set to lead the chasing pack with their new Saudi-backed wealth. But there was a pre-existing pressure that significantly influenced the Gunners' approach to the 2021-22 campaign: Financial Fair Play (FFP).

"If you see the wages we had [then] and we have [now] it's night and day," Arteta said on Friday. "It's not only about what you're spending, it's what you've sold, what you have done. We had 28 players and then you end up with 19 players in the squad, so it's not just about the total expenditure."

Arsenal director Josh Kroenke described Arsenal having a "Champions League wage bill on a Europa League budget" in the summer of 2019. A year later, the club's wage bill stood at about £230 million and in June 2021 it was £244.4m, just as the streamlining plan under Arteta really kicked into gear.

A total of seven players -- Henrikh Mkhitaryan, Mesut Ozil, Sokratis Papastathopoulos, Shkodran Mustafi, Sead Kolasinac, Willian and Aubameyang -- were all given a sizeable payoff to leave. Sources have told ESPN that in some cases, players got as much as 90% of the outstanding sum left on their contract.

Arsenal were the first English club to ask their players to take a pay cut in April 2020 when COVID-19 began to hit clubs financially, and missing out on European football for the first time in 25 years slashed revenues even further. Arsenal made 55 non-playing staff members redundant and cut swathes of their global scouting network. Ticket prices will go up 4% next season, the first increase since 2014.

play0:30Arteta on contract extension: I'm excited about what we can do together

Mikel Arteta feels he and Arsenal share the same values after signing a three-year contract extension.

All these measures have been designed to reflect Arsenal's more modest status after five years without Champions League revenue. And sources have told ESPN that the club were seriously concerned about their compliance with FFP regulations during this period.

Like elsewhere, the club's matchday revenue had dramatically declined as games were played behind closed doors due to COVID. Although their commercial income remained largely level, the £136m recorded in 2021 is the smallest of the traditional "Big Six" for the same period, with Manchester City leading the way on £272m.

Decisions on contract renewals for certain players -- including Eddie Nketiah, Lacazette and Mohamed Elneny -- were deferred until the end of the season, in part so the club could more accurately project revenues for 2022-23. The three-year cycle relevant to FFP contains the 2019-20 summer when Arsenal spent a club-record £72m to sign Nicolas Pepe from Lille, in addition to William Saliba (£27m), Kieran Tierney (£25m) and David Luiz (£8m), although they did recoup more than £30m when Alex Iwobi left for Everton.

The club were stretching themselves at the time; sources have told ESPN that Arsenal signed Pepe over Crystal Palace winger Wilfried Zaha in part because Lille were prepared to accept the fee in annual instalments over five years whereas Palace wanted £80m up front to let Zaha go.

Partly in response to fan protests over Arsenal's involvement in the failed European Super League project, stirring longstanding resentment among many towards the club's American owners, Kroenke Sports Enterprises, the Gunners committed a further £140m last summer on six new signings -- Aaron Ramsdale, Ben White, Nuno Tavares, Takehiro Tomiyasu, Albert Sambi Lokonga and Martin Odegaard -- to propel Arteta's rebuild forward, but that was money not expected to yield an immediate return given the young and largely unexposed profile of those acquisitions.

The combination of all these factors exacerbated the pressure on Arteta to work with a smaller, younger group adding quality where possible. After finishing eighth in 2020-21, senior figures at the club simply did not realistically believe Champions League football would be achievable.

Arsenal have been linked with a move for Manchester City's Gabriel Jesus. Photo by Jose Breton/Pics Action/NurPhoto via Getty Images

None of this stopped Arsenal from exploring deals in January, however. The Gunners held an interest in Fiorentina striker Dusan Vlahovic, but senior figures at the club have privately played down reports that multiple offers were made.

Sources told ESPN that the Gunners had a bad feeling about the deal early on as the 21-year-old's representatives took several days, or often longer, to reply to initial enquiries as Arsenal explored what a deal could potentially look like. Vlahovic eventually moved to Juventus for £66.6m, and the strong suspicion at Arsenal is that was always the plan and other clubs were used as something of a smokescreen.

Arsenal are inherently wary of the January window. Former manager Arsene Wenger once called for it to be scrapped entirely and, with every penny counting, they were reluctant to pursue an option -- likely at an inflated fee -- that didn't precisely fit Arteta's vision, especially given the wider FFP picture. Yet it is an inescapable fact that Tottenham ended up edging past Arsenal with the help of two key January signings: Rodrigo Bentancur and Dejan Kulusevski from Juventus, the latter initially on loan.

The three-year FFP cycle moves on with a new season, and Arsenal, with Europa League football back on the agenda, will look to make a number of new signings this summer. Sources have told ESPN that the club want two forwards, one of whom is versatile enough to play on the flank. Manchester City's Gabriel Jesus (who is valued at around £55m) and Juventus' Paulo Dybala (available on a free transfer this summer) are among those under consideration.

They also want a central midfielder -- Leicester City's Youri Tielemans has his admirers at the club -- cover at full-back and possibly a centre-back if money allows.

There will be multiple outgoings once again as Arteta continues his overhaul, while behind the scenes a "cultural review" is taking place in conjunction with an external consultancy firm; Arsenal confirmed on Sunday that head of high performance Shad Forsythe and kit-man Paul Akers will leave.

The Gunners may be in the midst of filming an Amazon "All or Nothing" documentary, but they were not prepared to risk everything for Champions League football. Arsenal took a view that next season they will be stronger regardless and that stabilising the club's financial position can deliver more sustained success in the long term. Given the ever-increasing competitive nature of the Premier League, it feels like a major sporting gamble.

As it is, a season framed as "All or Nothing" ends instead with merely "something" -- a Europa League spot. Having come so close to the Champions League, Arsenal's pragmatic view of their own progress only raises the stakes for everyone at the club next season.