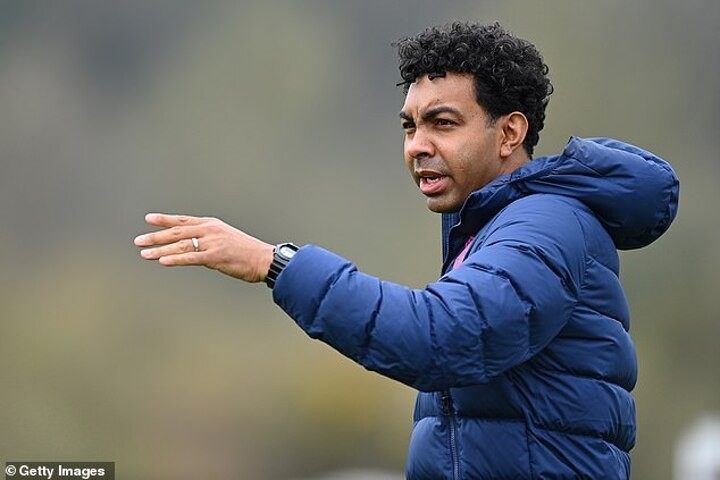 Arsenal have announced Kevin Betsy as the new head coach of the club's U23 side.

The Gunners have been on the lookout for a replacement for previous incumbent Steve Bould, who was sacked by the club in June following 33 years in various roles in north London.

Sportsmail revealed in June that England U18s boss Betsy had been identified as the prime candidate to replace Bould, and that has now come to fruition with the 43-year-old signing a deal with the club.

Betsy told the club's official website: 'It's an honour and privilege to be joining Arsenal as Under-23s head coach.

'Arsenal is of course an iconic club in world football with such a rich history. This is also a club with a very strong current record of developing young football players for the highest level, but also placing an emphasis on producing well-rounded young people.

'I've had a tremendous five years working with the Football Association in vital roles across the England youth teams. During this time I've worked with many hugely talented young players and some amazing colleagues in a wide range of departments.

'My work starts here and together with the talented people at this club, we aim to continue the strong work of providing the pipeline of talent to support the first team, whilst at the same time instilling the values and traditions of this football club, so that young players are ready for life as well as football.'

Gunners academy manager and former defender Per Mertesacker meanwhile added: 'We are extremely delighted that we have recruited through our interview process such a high profile candidate as Kevin Betsy.

'Kevin joins us from his current position as the Under-18s Head Coach for England. He has had very strong experiences through academy and youth football, and has a wealth of knowledge and ability.

'We are excited that Kevin will drive us to continue to deliver on our vision to develop and build ''Strong Young Gunners''.

'Kevin has proved in his coaching career that he will be a colleague who can contribute strongly to our players' development pathway by leading our Under-23s team, including our staff and players.

'We are incredibly pleased that Kevin is joining us and we discovered throughout the interview and recruitment process that Kevin is excited and passionate about joining the club and our academy.'

The moves comes as another blow to the FA, who also recently lost U19s head coach Justin Cochrane to Manchester United.

But it comes in the latest step by Mertesacker to revamp Arsenal's academy, which has also seen U15s coach Dan Micciche's promoted to U18's head coach.

Before becoming a coach, Betsy enjoyed an 18 year-long playing career, making more than 400 appearances in English league football for the likes of Fulham and Barnsley, amongst others.

He then started his coaching career at the academy at Craven Cottage, before spending the past five years working in a variety of roles with England youth teams across several age categories.

That brought the reward of eventually becoming the Three Lions' U18s boss in September last year, but he spent fewer than 12 months in that role following his latest move back into club football.