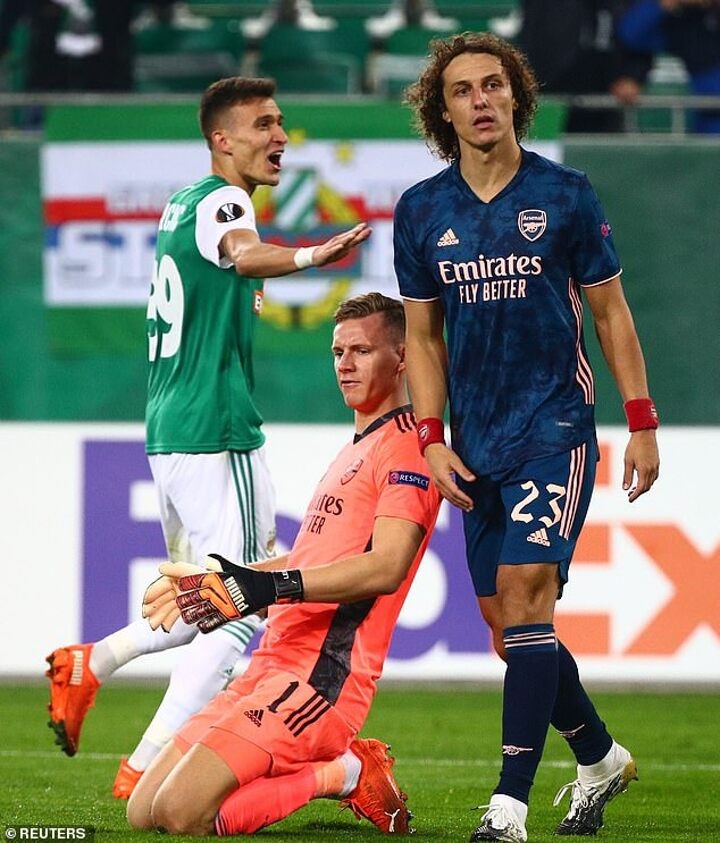 The German goalkeeper received the ball from David Luiz and looked to get his side going again, but his pass out was easily intercepted by Rapid forward Ercan Kara.

The interception fell perfectly for strike partner Taxiarchis Fountas to put the hosts into a shock lead early in the second half.

The Gunners came back to win thanks to a David Luiz header and a close-range finish from Pierre-Emerick Aubameyang to spare Leno's blushes.

But with the Gunners behind for 19 minutes before Luiz's header, plenty of Arsenal fans vented their frustration at No 1 goalkeeper Leno.

The German continued to have a shaky match after his blunder, with another tweeting: 'Leno is having the worst game I've ever seen from him,' while another user said: 'I was until I chucked my telly out the window! What the hell was Leno doing!!!, we definitely got rid of the wrong goalkeeper, and then he tried to do it again not long after.'

The second user was referring to the sale of Emiliano Martinez for £20million to Aston Villa in the summer after a string of excellent performance for the Gunners at the end of last season.

And BT Sport presenter Jake Humphrey said the club may regret the decision, saying: 'Letting Martinez go seems an even worse decision when you see this. Leno did it again a few minutes later. Lucky not to be 2 down...'

Speaking to BT Sport after the game, former Gunners defender also questioned the decision, saying: 'We know they got rid of Emi Martinez in the summer, but when you see Leno making these types of mistake you do wonder if they've made the right call.

'He had a difficult night tonight. They showed good character to get back into it Arsenal.'

Owen Hargreaves however was not as critical, adding: 'He had a bad day at the office Leno, but team mates bailed him out and they've got the win.'

Another preferred to compare him to under-fire and error-prone Chelsea goalkeeper Kepa Arrizabalaga, writing: 'Leno With His Best Kepa Impression Tonight'.

Leno found very few supporters online following his error, but he did find one in the form of compatriot and team-mate Mesut Ozil.

The Arsenal outcast wrote: 'Chin up Bro @Bernd_Leno! We still have enough time to turn this around guys! Come on Gunners!!'

Ozil was left out of both Arsenal's Premier League and Europa League squads this season and has not played for the Gunners since March, watching the match in Austria at home.

Having been left out of the squad, he accused the Gunners of a lack of loyalty with a statement posted online earlier this week.

Gunners boss Mikel Arteta however insisted the decision to leave out the £350,000-a-week star was motivated by football reasons.