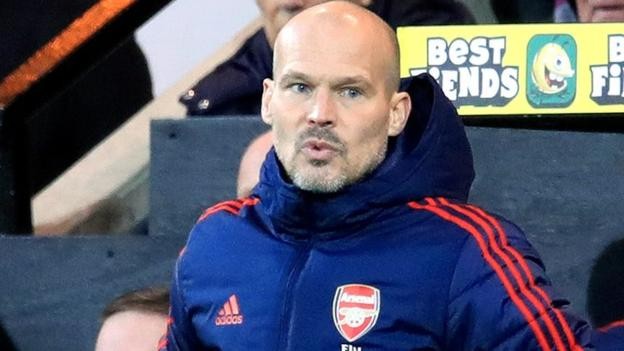 Freddie Ljungberg played 328 times for Arsenal in a nine-year spell at the club, helping them win the Premier League twice and the FA Cup three times

Freddie Ljungberg is not the right man to manage Arsenal on a long-term basis, said former Blackburn striker Chris Sutton.

Ex-Gunners midfielder Ljungberg, 42, is in interim charge of the club after they sacked Unai Emery last month.

"Freddie said he was 100% sure they would get into the top four but based on what? It's fantasy," said Sutton on BBC Radio 5 Live's Monday Night Club.

"They need to get someone in place that they are going to get a reaction from."

Ljungberg, who played for Arsenal between 1998 and 2007, had been Emery's assistant after working with their under-23 side but has no previous managerial experience.

In his only game in charge so far, the Gunners twice fell behind to a Norwich City side in the bottom three before Pierre-Emerick Aubameyang twice equalised in a 2-2 draw.

That result left Arsenal eighth in the Premier League, 21 points behind leaders Liverpool and seven behind fourth-placed Chelsea.

"Did you expect them to be much different?" added Sutton, a Premier League title winner with Blackburn in 1994-95. "It has been the same for the last decade and it's still the same problem.

"They need to change the model, the recruitment. Over the summer they brought in [winger] Nicolas Pepe [for £72m] but the issues were at the back."

"Arsenal need someone to come in and teach them about defending.

"Calum Chambers has been around long enough to see if there's been an improvement but there hasn't been. I don't think he's good enough to be an Arsenal regular.

"Sokratis is nowhere near good enough. I don't think he would get into any Premier League side."

Emery's sacking by Arsenal came 10 days after Tottenham dismissed Mauricio Pochettino, although Spurs acted decisively by bringing in Jose Mourinho the next day.

"At Tottenham they sacked the manager, it was a bit harsh but the time had come, and they had a manager six hours later, that's how Arsenal should've done it," said former Liverpool midfielder Charlie Adam.

"Whoever comes in, it's a short-term fix and in January he will need two centre-halves but there's no money."

Townsend added: "Jose Mourinho, when he looked at the Spurs team and the players he was working with, he has Son Heung-min, Harry Kane, Dele Alli, Lucas Moura and thought 'we have half a chance'.

"With Arsenal you will think 'I can win games with these players but I've got to sort out a team'. You will never stop Sokratis making mistakes. If you rely on him you will be changing manager every six months."

On Monday, Brendan Rodgers, manager of second-placed Leicester, dismissed speculation linking him with the Arsenal job, although on Sunday he had revealed there was a release clause in his Foxes contract.

"If Arsenal make the phone call and offer whatever that buy-out clause is, £15-£20m, that's nothing to Arsenal. That sort of money they should find in a heartbeat," added Townsend.

"They would spend it on a player and throw it away in 10 games. They spent £72m on Pepe and he does not get a game. To spend £25m on Brendan Rodgers, if he is the one they want then why wait?

"We've all enjoyed the Leicester story. It has been one of incredible highs and they are a great watch but they're not on the same level globally as Arsenal are - to be back at Arsenal would be him back up among the elite."

Why would I want to leave Leicester? - Brendan Rodgers

Adam described Rodgers as "the perfect fit" for Arsenal but doubted whether it would be the best decision from the former Liverpool and Celtic boss to leave Leicester for Arsenal.

"I don't think it would be a good move for Rodgers," said Adam. "At Leicester you have a new £100m training ground, four or five players at the top of their game - players like Youri Tielemans, Jamie Vardy, James Maddison.

"I would want my manager to say 'I'm not interested in any other job'. If you don't want to get it out there you don't admit you have a buy-out clause. I think he wants the job."

What about the other contenders?

Townsend believes Wolves boss Nuno Espirito Santo, who won the Championship in 2017-18 and guided them to seventh in the Premier League last season, is the right man at Emirates Stadium.

"When I see the job he's done at Wolves, getting them promoted, making them a seriously good team to watch, Nuno would be great," said Townsend.

"He looks like a coach who wants to get into a player's head and turn them around and some of the Arsenal players need that."

Townsend also mentioned former Liverpool, Chelsea and Newcastle boss Rafael Benitez as another strong contender, but did not think Pochettino would move and join Tottenham's fiercest rivals after more than five years in charge of Spurs.

"I wonder what the Arsenal fans would think of Benitez," added Townsend. "He has been successful and managed at big clubs and has a history of trying to organise a team - and Arsenal need that.

"It's too early for Mauricio Pochettino, he needs a breather instead of bouncing out of one job and into another.

"He was gone at the end. Have Christmas off at home and enjoy time with his family and friends. Pochettino can get a better job than Arsenal."