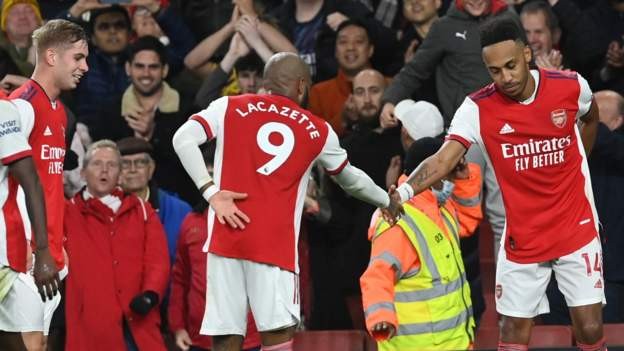 Pierre-Emerick Aubameyang is the fourth player to score a Premier League goal for Arsenal on every day of the week, after Thierry Henry, Alexis Sanchez and Alexandre Lacazette

Arsenal gained a thoroughly deserved victory over Aston Villa to move into the top half of the Premier League table.

Thomas Partey headed in Emile Smith Rowe's corner for his first goal for the Gunners - having earlier hit the crossbar.

Right at the end of the first half, Arsenal were given a penalty after a long video assistant referee review for a Matt Targett foul on Alexandre Lacazette.

Villa improved on a thoroughly wretched first half, but Smith Rowe scored Arsenal's third 11 minutes into the second half.

He won the ball in his own half and then finished the move via a deflection and the post.

The visitors got a consolation when Jacob Ramsey curled his first Villa goal into the top corner from 20 yards. They put on good pressure and created a few chances in the closing stages but it was too little, too late.

This did not look like a game between two teams sitting next to each other in the table - but Arsenal were 12th and Villa 13th before kick-off.

Arsenal are capable of good spells - like at the start of Monday's 2-2 draw with Crystal Palace - and good games - like the 3-1 win over Tottenham.

This was one of the good games, well for 80 minutes.

Aston Villa were the opposite of their 3-2 defeat by Wolves. They collapsed there in the final 10 minutes - but this time that was when they they had most of their chances.

They did not manage a shot in the first half, the first time since May 2018 that has happened to a team playing against Arsenal in the league.

The Gunners should have been out of sight - Partey had hit the woodwork from close range before headed them into the lead.

Aubameyang had a goal disallowed for a debatable Lacazette foul and Martinez made several smart saves.

But Arsenal got the second they deserved in first-half injury time. The crowd thought Craig Pawson was whistling for half-time but he was actually stopping play for a VAR consultation.

Targett was about to clear the ball when Lacazette stepped across him and drew a foul instead. The penalty was given and Aubameyang scored at the second attempt.

Villa had more threat when they brought on winger Leon Bailey for defender Axel Tuanzebe at half-time, but after their first couple of chances, Smith Rowe wrapped it up.

Or so it looked until Ramsey scored the best goal of the game. Ollie Watkins, Ramsey and Bailey all had chances to for Villa but could not set up a tense finale.

Attempt missed. Leon Bailey (Aston Villa) left footed shot from outside the box is just a bit too high from a direct free kick.

Leon Bailey (Aston Villa) wins a free kick in the attacking half.

Attempt missed. Jacob Ramsey (Aston Villa) left footed shot from the centre of the box misses to the right. Assisted by Matt Targett.

Bukayo Saka (Arsenal) wins a free kick in the defensive half.

Attempt saved. Martin Ødegaard (Arsenal) left footed shot from outside the box is saved in the top right corner.

Bukayo Saka (Arsenal) wins a free kick in the attacking half.