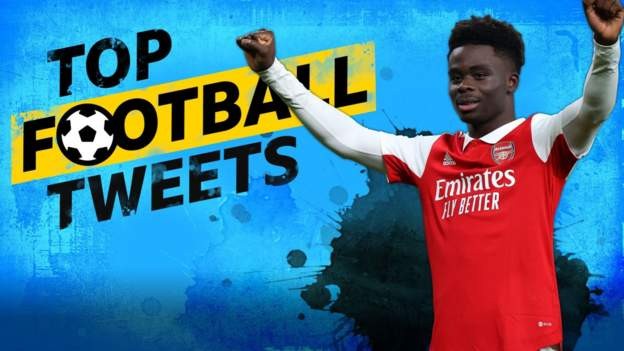 Arsenal continue to set the standard, Liverpool and Chelsea bored fans to tears and there was chaos in the Women's Super League.

It felt like going back to the early-noughties on Sunday as Arsenal and Manchester United fought out a five-goal thriller in north London that had ramifications at the top of the table.

It was an impressive performance from the Gunners, who proved why they deserve to be leading the Premier League title race.

Meanwhile, Liverpool v Chelsea was a good cure for insomnia, and WSL players have demanded better from authorities after matches were called off at late notice.

All of that and more is covered in this week's round-up of some of the best tweets from the weekend's football action.

1. Now you're Gunner believe it

Eddie Nketiah scored a 90th-minute winner for Arsenal against Manchester United which keeps them five points clear at the top of the table, with a game in hand over second-placed Manchester City.

The Gunners are now in the driving seat as they hunt a first Premier League trophy since 2004. It's not just their fans who are loving it - Arsenal players past and present also celebrated the win in style.

Meanwhile, nothing could dampen Mikel Arteta's spirits after the final whistle.

Nope - that isn't a blurb for a Shakespeare play. We're talking about Romeo Beckham, who was at Emirates Stadium on Sunday with his old man David - and father and son had split loyalties.

Romeo of course used to play within Arsenal's youth set-up and recently made his debut for Brentford's B team.

Arsenal and Manchester United are both resurgent this season, but Liverpool v Chelsea has become a mid-table slog all of a sudden.

The two sides met on Saturday in a drab goalless draw at Anfield. The quality on display told a story about where both clubs - in ninth and 10th place going into the fixture - are currently at.

For Jurgen Klopp, it was a landmark game, but perhaps not one he will remember too fondly.

In the WSL, late cancellations over the weekend due to adverse weather conditions led players to call for better treatment of footballers and fans.

Chelsea's fixture against Liverpool at Kingsmeadow in Kingston upon Thames was called off six minutes after the match had kicked off.

The game was scheduled at 12:30 GMT following an earlier pitch inspection.

Players from both clubs and from around the WSL aired their frustrations at the way the situation was managed.

Elsewhere, Arsenal's trip to Brighton was also postponed because of a frozen pitch on Sunday after an afternoon inspection.

Defender Lotte Wubben-Moy made a nice gesture to those fans who had made the journey.

Thankfully, more than 5,000 fans did get to watch a WSL match on Sunday, as 10th-placed Reading hosted title-chasing Manchester United.

A win for United sent them top of the league on goal difference from Chelsea, with Arsenal three points back with a game in hand.

Manchester City look to have added another Argentine youngster to their squad, following on from the signing of Julian Alvarez last winter.

The 20-year-old midfielder has been described as 'the next Frenkie de Jong'. That should go down like a cool drink on a hot day.

On Sunday, the 22-year-old Norwegian striker scored his fourth Premier League hat-trick, which puts him level with Mohamed Salah. He has only played 19 games in the league.

Meanwhile, another loss means the Toffees are in 19th place, after 10 games without a win in all competitions.

It may prove to be the final nail in the coffin for manager Frank Lampard, whose future at Goodison looks in doubt.

View more on twitter9. Proud to wear the shirt