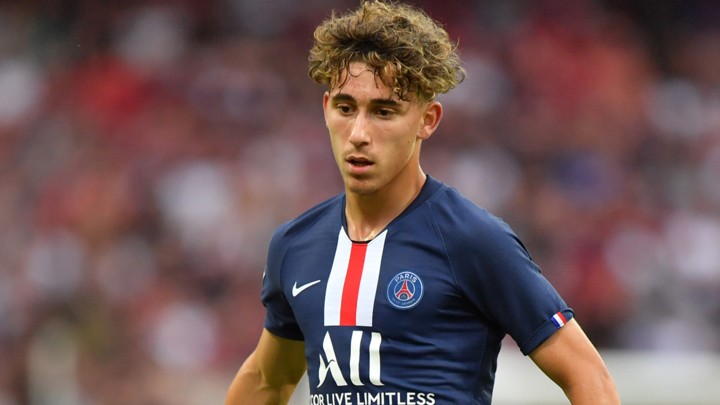 PSG are set to lose Adil Aouchiche on a free transfer after the midfielder, who has been linked with Premier League side Arsenal, arrived at Saint-Etienne for the first part of a medical.

Sources have told Goal that the highly-rated 17-year-old arrived in Forez on Thursday evening with two of his representatives and underwent preliminary medical tests with ASSE on Friday, with a view to signing for the club.

Aouchiche has thus far resisted PSG's attempts to tie him to his first professional contract, with the attacking midfielder exploring his options as he prepares to leave the Ligue 1 champions in the summer.

Arsenal held brief discussions with the player's representatives but there was no contract offer made and a move for the Frenchman was not seen as being possible at the time.

Instead it is Saint-Etienne who appear to be at the front of the queue to secure the signing of the teenager, who scored nine goals in five matches at the Under-17 European Championship in 2019 to finish as the tournament's top goalscorer.

Indeed, club officials are expected to arrive later on Friday to continue negotiations, with the Ligue 1 side aware that Aouchiche is attracting interest from elsewhere.

Aouchiche made his debut for PSG in August 2019, starting the 2-0 win over Metz before being replaced in the 65th minute, with both Kylian Mbappe and Neymar absent from the squad.

He scored his first goal in professional football in the 6-0 Coupe de France win over Linas-Montlhery in January 2020, with the midfielder having made a total of three appearances for the first team in 2019-20 prior to the season ending amid the coronavirus pandemic.

As reported by Goal back in December, PSG had been hopeful of tying down Aouchiche to a professional contract, with his family having been keen for him to remain in Paris to further his development.

However with there having been no breakthrough in negotiations up to now, the youngster's presence in Saint-Etienne does not bode well for the French top-flight champions.

Indeed, should Aouchiche complete a switch to ASSE it would represent a significant blow to sporting director Leonardo and represent something of a coup for their Ligue 1 rivals, who have been working hard for months to secure the midfielder's signature.

The latest developments also come on a day when PSG lost another player from their academy system, with Ayoub Yousfi rejecting a contract from Thomas Tuchel's side in favour of a switch to Angers. The mid-table Ligue 1 side's youth team will participate in the UEFA Youth League for the 2020-21 campaign, where Yousfi will be seen as an integral part of that squad.

Angelo Castellazzi, Leonardo's assistant at PSG, continues to work on the renewals of the club's young players who were born in 2002, with Thierno Balde, Kenny Nagera and Tanguy Kouassi all yet to agree new terms.