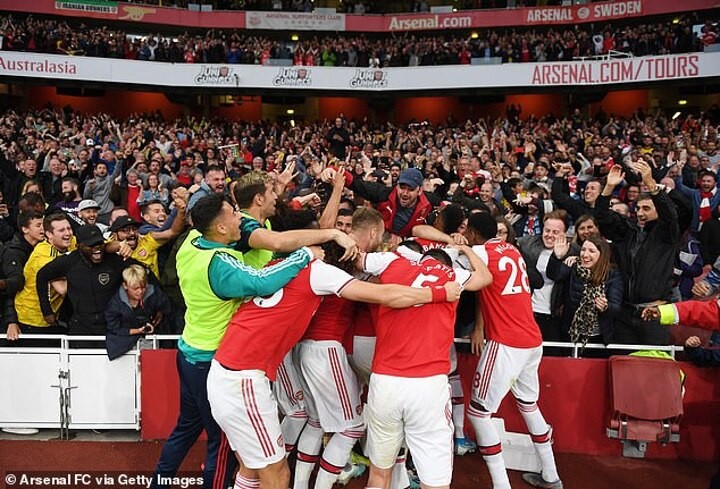 Arsenal are planning to distribute tickets to key workers and fans who have struggled during the pandemic after being given the green light to play in front of supporters.

The Gunners will be allowed 2,000 fans at the Emirates after London was placed in Tier 2 this week.

It will be the first Premier League stadium to welcome back fans when Arsenal face Rapid Vienna in the Europa League on Thursday. And Burnley’s trip to the Emirates next month will be Arsenal’s first home league game with fans.

Spurs confirmed 2,000 fans would be allowed to attend next week’s north London derby with tickets available via a ballot.

Tickets will be split between season ticket holders and corporate fans, though the final breakdown is yet to be confirmed.

The requirement to make tickets available for commercial partners and premium-seat holders is one of the reasons clubs were hoping fans would be allowed to return in bigger numbers, ensuring more regular supporters could see games.

That corporate tickets cost more is also a factor clubs have to consider given they are braced for significant losses due to the costs involved in staging games in front of such small crowds.

West Ham will play in front of fans again for the first time when they host Manchester United next Saturday evening. They will also make 2,000 tickets available via a ballot. Season ticket holders will be automatically entered, though supporters whose addresses are in Tier 3 locations will not be able to attend the game.

The midfielder tested positive while on international duty with Egypt and has been in isolation, missing Arsenal’s games against Leeds and Molde. Arsenal will make a late call on Bukayo Saka, and Thomas Partey and Willian are continuing to be assessed.

The club were able to train on Friday afternoon as originally planned despite having to change their flight plans following Thursday's Europa League win at Molde.

They were due to board a flight home after the game but that had to be cancelled because of the foggy conditions in the UK.