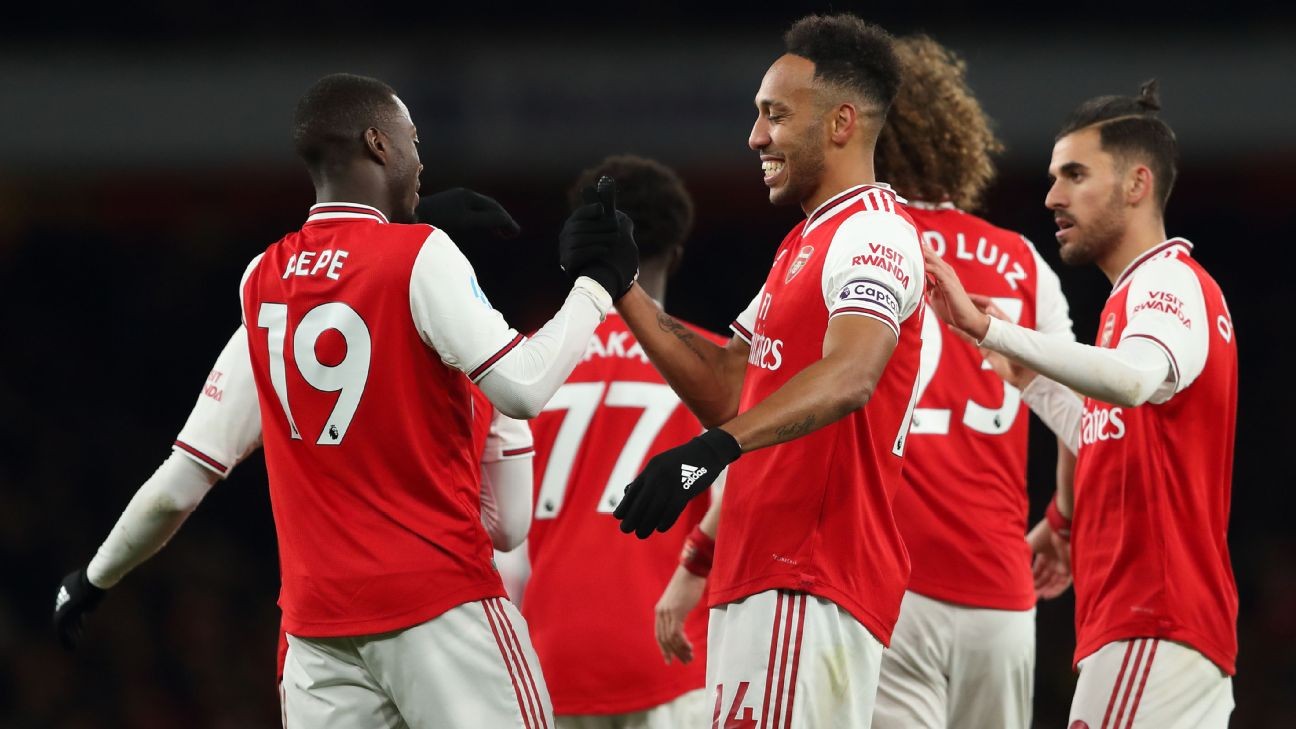 LONDON -- When the great history of Mikel Arteta's time at Arsenal is written, there will be many more convincing performances than Sunday's 4-0 win over Newcastle. At least, Gooners around the world will hope so.

The scoreline didn't reflect the overall flow of the game, as Arsenal racked up a couple of bonus goals at the end as Newcastle gave up on the concept of defending and waved their opponents through. But looked at another way, Sunday's thumping victory might be looked back on as the game when things started to click, that the work Arteta has been doing with this Arsenal squad has translated into something tangible. Maybe, just maybe, the theory is beginning to become practice.

Before this fixture, Arteta had taken charge of seven Premier League games, winning only once. In most of those games there were small signs of what Arteta is trying to do, glimpses of progress with ultimately little to show for it. For all the reports about a squad reenergised behind the scenes, it was easy to simply write this all off as improvements on paper, not on grass.

Speaking to Sky Sports this week, Arteta seemed aware of the problem. "It's down to us to accelerate the process as much as possible, without killing the process but by winning as many games as we can," he said.

Will Sunday's win accelerate the process? There were certainly enough signs to suggest so. Their second goal in particular, swept home by Nicolas Pepe after brilliant work by Bukayo Saka on the left, felt like exactly the sort of goal Arteta's Arsenal have been working towards: rapid and decisive. Pepe also added a pair of assists, the translation of his clear promise into something more commensurate to his hefty price tag edging closer.

"Hopefully," said Arteta after the game, when asked whether Pepe's performance was a sign that things have clicked with the winger. "We just need consistency from him, which from talented wide players in this league is not easy to get, because the most difficult thing to do is to create.

"There are certain things Nico needs to maintain, game-by-game, but he knows that. The way he applied himself defensively -- things he wasn't doing in the past -- he was top-drawer. When he does that, the rewards in the other box come. He made the difference today."

Arsenal put on a show in the second half against Newcastle but it would be wise not to get too carried away. That said, this team's earned a little.

Dani Ceballos' performance in the heart of midfield was another plus, particularly in the second half, the Spaniard shifting the ball with purpose from the heart of midfield and being heavily involved in two of the goals. Ceballos's Arsenal career has been a curious one thus far but against Newcastle, we saw the player Arsenal thought they were getting. "I thought Dani was ideal for this game in this position today," said Arteta.

The third goal arguably brought the most cheer. The move leading to it consisted of 35 passes, with every Arsenal player involved at some point. That kind of stat can be somewhat meaningless at times, but in Arsenal's case it points to the sort of control Arteta is looking for. "When everybody is involved and participating towards a goal, it's very pleasing for me," said Arteta.

As always with Arsenal, the necessary caveats should be applied. For much of the first half they struggled to control the game, not doing a huge amount with the 63% possession they had: technically dominant but in a pretty passive way. A better team would have scored at least twice before the break and once after it: Allan Saint-Maximin caused chaos in that "he doesn't know what he's doing, so defenders definitely don't know what he's doing" way, while Joelinton and Miguel Almiron passed up opportunities that absolutely should have been taken.

"We found it difficult in the first 20-30 minutes," said Arteta. "[Newcastle] are really compact and when that happens, you can get a bit frustrated. I didn't like [the first 30 minutes], but after that we started to control situations much better, get into the final third much more continuously, and in the second half we attacked much better, which allowed us to control the game."

Arsenal also still require a more stable central defence than David Luiz and Shkodran Mustafi. Though this was their second consecutive clean sheet, the first time they've managed it since last March, both of those games (Sunday and against Burnley last time out) had more to do with the wayward finishing of the opposition than their rock-solid defensive shape.

In the end, though, the positive signs will outshine the negatives. The last two goals, which you could argue Arsenal didn't really deserve and were fortunate in their own ways, were important too. Mesut Ozil's jabbed finish, squirming as it did through the uncertain hands of Martin Dubravka, was his first goal of any description since April: Arteta has showed renewed faith in the mercurial German and just like the win rewarding their general improvement, this provided some tangible justification for his decisions.

Alexandre Lacazette's goal was a slight mishit but again could be significant. The Frenchman started the game on the bench with Eddie Nketiah playing as centre-forward, which Arteta portrayed post-match as simply a reward for the youngster's performances in training. Yet it was also interpreted as a giddy-up for Lacazette, who hadn't scored in his previous nine games. The glee with which his teammates piled on Lacazette after the goal suggested it was a popular one within the dressing room.

It's always easy to apply excessive significance to one result, and in particular with Arsenal, you're always well-advised to err on the side of caution when it comes to predicting good times returning for good. After all, they had a run under Unai Emery last season that suggested the path back to glory was being trod, and look how that turned out.

That said, Sunday's emphatic win might prove to be a crucial win in the development of Arteta's Arsenal. It's always handy not to get too carried away but for this one, getting just a little bit carried away is justifiable.