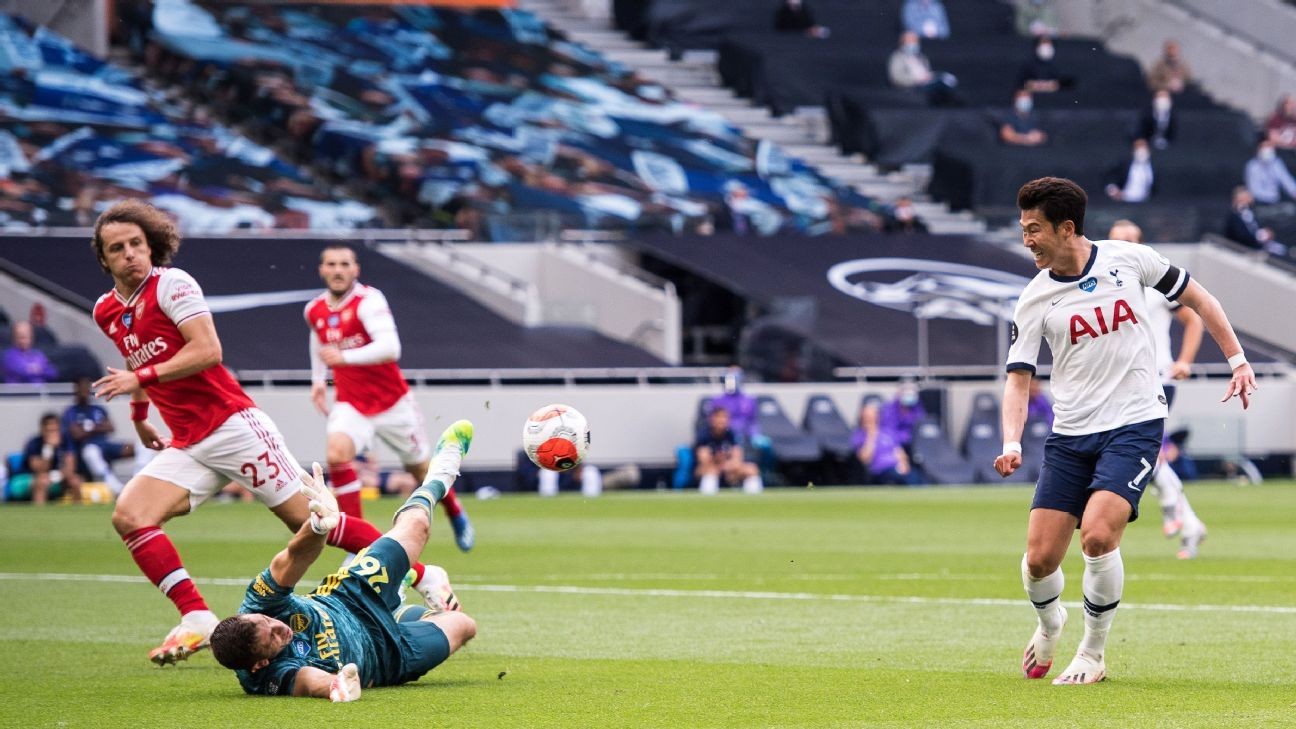 William Saliba is going to have to be Bobby Moore from the get-go to fix Arsenal next season. The Gunners have at least sought to address their defensive issues by spending £27 million to sign the 19-year-old from Saint-Etienne, but in their 2-1 defeat to Tottenham there was yet more evidence of the sheer number of holes he will have to fill.

There was plenty to like about the Gunners even in defeat: Alexandre Lacazette's wonderful 16th-minute opening goal, another influential performance from Dani Ceballos in central midfield and a second half they controlled for long periods.

Whether by accident or design -- and Jose Mourinho stated it was the latter -- Tottenham sat noticeably deeper in the second half, content to soak up pressure and wait for the visitors to gift them an opportunity to win the game. It was textbook Mourinho and the most damning thing for Arsenal is they still duly obliged. A mix-up between Sead Kolasinac and David Luiz created Son Heung-min's 19th-mimute equaliser and after Shkodran Mustafi was bailed out by goalkeeper Emiliano Martinez for allowing Harry Kane to escape too easily, the Gunners conceded from the resulting corner.

Luiz 5/10 as Arsenal lose North London derby to SpursAlderweireld, Son both 8/10 as Spurs leap rivals ArsenalMourinho: I will win trophies at Spurs before I go

Toby Alderweireld climbed highest to meet Son's corner -- a rare Spurs goal from a set piece -- and Arsenal were done. Champions League football has gone and even the consolation prize of Europa League qualification is far from secure, leaving head coach Mikel Arteta facing even fewer financial resources at his disposal. That means working to improve the players he has or trying to shift widely maligned defenders for diminished fees. Substandard defending has blighted Arsenal for years, as Arsene Wenger, Unai Emery and now Mikel Arteta all switched to a back three in an attempt to find greater stability. The problem with that, however, is it means there are more error-prone centre-backs actually on the pitch at once.

As if to set the tone for the afternoon, all three -- Luiz, Kolasinac and Mustafi -- gave the ball away under pressure inside the opening 90 seconds here. Spurs began pressing high up the pitch in the knowledge there were gains to be made from Arsenal's profligacy in possession. By the end, they didn't even need to chase them -- fatigue suggested that was too much of a struggle anyway -- yet the mistakes were still there.

Luiz is supposed to provide useful experience on occasions like this but instead this was another day when he spread mild panic. Mustafi's recent improved performances have led to talk of a new contract but in the second half he regressed to an almost embarrassing extent, Kane repeatedly beating him with minimal effort only to be denied by Martinez on multiple occasions. The Argentine, deputising for the injured Bernd Leno, sat crestfallen on the turf at the final whistle yet the scoreline would have been worse were it not for several fine saves, the best of which came on a Ben Davies' long-range effort which he tipped onto the crossbar after half an hour.

Spurs were not without mistakes of their own at the back. Serge Aurier managed to condense a poor header, loose touch and weak tackle into one piece of defending, affording Lacazette the opportunity to capitalise in superb style, firing into the top corner from the edge of the box. Aurier's days in London are surely numbered and Spurs need to find cover for Davies. Jan Vertonghen is set to leave on a free transfer when this season is completed, while Davinson Sanchez makes too many mistakes.

Sead Kolasinac and David Luiz combined to gift Spurs their first goal, just the latest in a long list of errors from the Arsenal defense. Photo by Sebastian Frej/MB Media/Getty Images

In truth, the collective defending on show merely underlined why this was eighth versus 11th at kick-off. Two teams aspiring to be Champions League level are currently exhibiting standards of defending that isn't presently good enough for the Europa League. The fall is more remarkable in Tottenham's case given they reached the Champions League Final barely 12 months ago. The irony here, of course, is that a centre-back got the winning goal. Alderweireld's smart header sealed the points, leaving Arteta to rue familiar failings, the Gunners have now lost 15 points from winning positions since the Spaniard took charge in December, more than any other Premier League team in that period.

"It is mentally tough because your mindset is you are ahead, you are controlling the game, everything that we talked about actually is happening and then you give that moment away," he said.

"Mentally, it affects our whole momentum. Our energy, still we came back in the second half, we were better, we were even more dominant, we had more control. In an isolated action, we conceded a set piece.

Mourinho enjoyed this. After two distinctly underwhelming displays against Everton and Bournemouth, Spurs ground out a victory by adopting a style much more in the Portuguese' image. He is now unbeaten in 10 home games against Arsenal, winning six of those. The detail comes at a price.

"How much will you pay for the class?," Mourinho said with a smirk in response to a question asking him to outline his specific approach. "Amazon are the lucky guys because they know everything.

"What I asked from them tactically, they gave me but what I asked them from the emotional point of view, they gave me even more. They felt the game as a fan. Now we still can fight until the end for a Europa League position. Without a victory today, that would be very, very difficult."

Spurs will fight on while Arsenal have the insurance policy of an FA Cup semi-final in addition to trying to rally in the league. Their defending must improve and fast. They play Liverpool and Manchester City next.