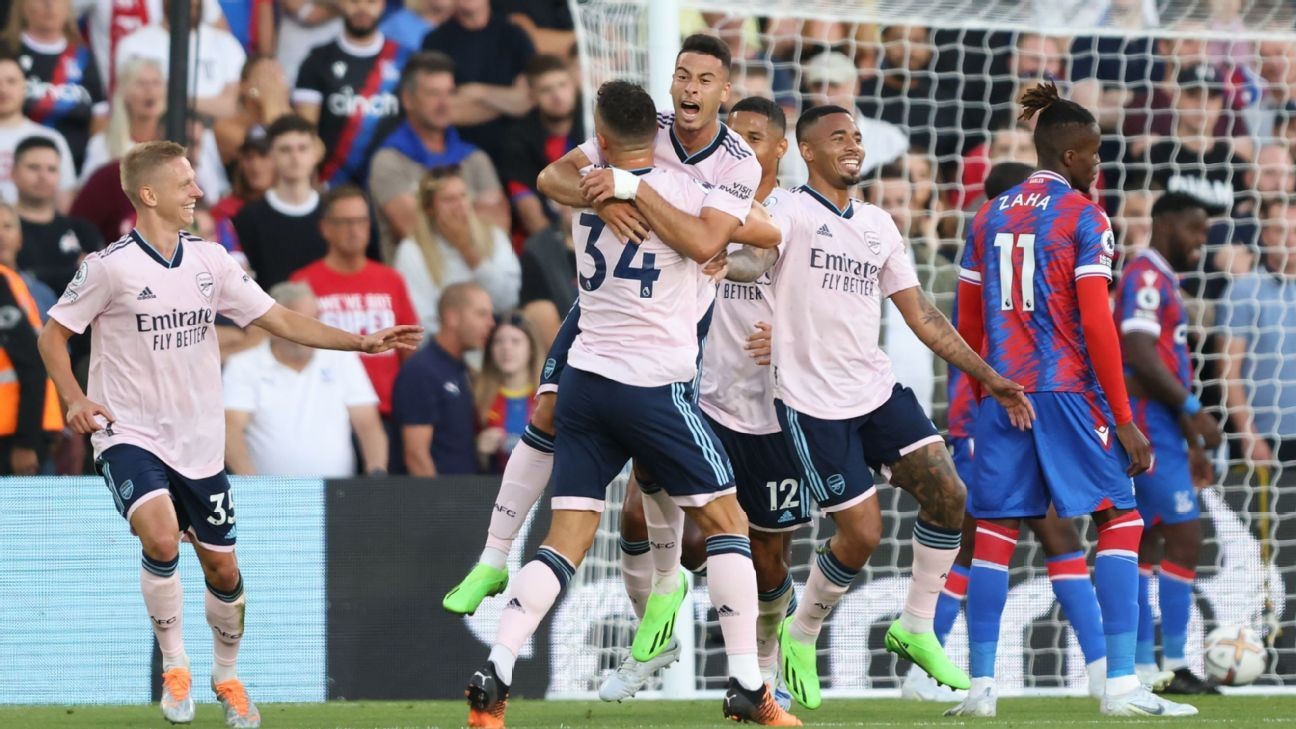 Arsenal made a winning start to the season as a goal in either half gave Mikel Arteta's side a 2-0 victory over Crystal Palace in the opening game of the Premier League campaign at Selhurst Park on Friday.

Gabriel Martinelli headed home from close range in the 20th minute following a well-worked corner before a fierce cross from Bukayo Saka was turned into his own net by Palace defender Marc Guehi in the final minutes to secure an opening three points for Arsenal as they maintained momentum from a summer of positivity around the red half of north London.

"We started really sharp ... to win here you need to suffer," Arteta told Sky Sports. "We've done it and that's part of the mentality that we want to build, to come to these places and find a way to win,"

Arsenal took their impressive preseason form into the start of the game, pressing well and dominating the early going. And it was big summer signing Gabriel Jesus who was at the heart of the action for Arsenal.

With just five minutes gone, Jesus brilliantly dribbled through a handful of Palace defenders before his shot was blocked into the path of Martinelli, whose shot was dragged wide of the far post with the goal at his mercy.

But Martinelli did not have to wait long to make amends. This time he was set up by Arsenal's other summer recruit from Manchester City Oleksandr Zinchenko. With a well-worked corner routine, Zinchenko header Bukayo Saka's deep corer back across goal, where Martinelli got just enough on his header to beat Vicente Guaita in the Palace goal.

Palace began to gain a foothold as the first half wore on and it took two impressive defensive contributions from Arsenal to maintain their lead going into the interval.

Odsonne Edouard had a clear chance with a header from six yards but Aaron Ramsdale reacted well to dive and parry the ball to safety. Minutes later it was Granit Xhaka making the intervention as he got a foot in to deflect Edouard's close-range shot over the crossbar.

Ramsdale was called into action again at the start of the second half, coming smartly off his line to deny Eberechi Eze after the Palace player was played clean through by Wilfried Zaha on the break.

But while lacking the explosiveness of their start to the game, Arsenal, helped by a standout performance on debut from William Saliba in defence, steadied themselves to prevent further drama. And when Guehi was caught out by Saka's ball across goal with five minutes remaining, Arsenal could relax in the knowledge that they would be the first winners of the 31st Premier League season.

"We knew it would be hard here but we were strong and solid," Saliba, who spent the last two-and-a-half years on loan in France, said. "I've waited a long time to make my debut and I'm happy to start with a clean sheet and a win, it's important for confidence."