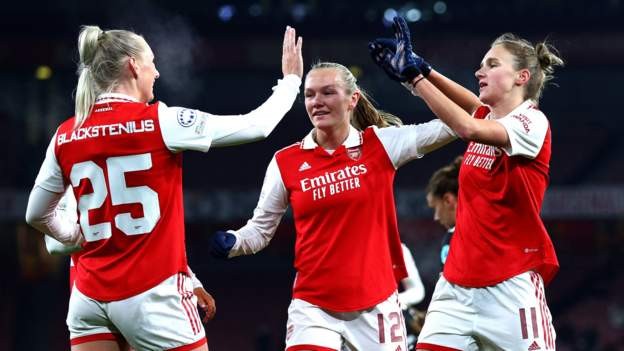 Arsenal strengthened their control of Champions League Group C as they recorded a tricky victory over Juventus at Emirates Stadium.

Vivianne Miedema scored the only goal, a stunning half-volley from Stina Blackstenius' cross on 16 minutes.

Juventus looked more likely to score in the second half but failed to find the killer blow in a drab encounter.

Arsenal sit top of Group C and face Lyon next week needing only a point to progress.

After an early chance saw Juventus' Barbara Bonansea fire in a shot from 12 yards that Manuela Zinsberger saved with her leg before Lineth Beerensteyn shanked the rebound wide, the Gunners settled into the match.

The hosts, though, lacked ruthlessness in front of goal as Miedema, Blackstenius and Katie McCabe all posed a threat but with the Gunners only able to make one of their 14 shots count.

Blackstenius found the back of the net when Caitlin Foord's pass released her but the Swedish forward's run was timed too early and the goal was chalked off for offside.

But Blackstenius' cross, which evaded Juventus goalkeeper Pauline Peyraud-Magnin, found Miedema unmarked at the back post and she thumped home on the half-volley for her third goal in as many games.

Juventus boss Joe Montemurro, returning to Arsenal for the first time since leaving the London club in 2021, said before the game it would be "special" to play at the Emirates but saw his side struggle to get in the game.

The Italians were more energetic in the second half but failed to create any meaningful chances and will face Zurich next week in a bid to keep their hopes of qualification from a tough group alive.

Had Lyon been stopped by Zurich on Wednesday Arsenal could have progressed to the knockout phase but the eight-time European champions' 4-0 victory means the Gunners will have to wait until they come face-to-face next week at Emirates Stadium.

Reaction from Arsenal's victory over Juventus

Miedema thriving after leave of absence

It was certainly no vintage performance from Arsenal as they had chances to add to their lead and, on another night, could have been punished for their failure to be clinical in north London.

But as Arsenal's injury woes continue, with Beth Mead, Kim Little and Lina Hurtig all still sidelined, the return to form of Miedema will provide a welcome relief to boss Jonas Eidevall.

"It's as easy as being mentally ready to play and to train and to enjoy," said Eidevall. "In the last two games here, we've seen some brilliant stuff from her both in attack and defence.

"The weight of her passes and her touches, it's extraordinary how well she's doing things like that.

"If we finished a bit better, we would talk of her having multiple assists in these games as well and not only scoring goals. I'm very happy for her that she is able to show these performances."

Since Manchester United ended Arsenal's 14-game winning run in the WSL in November, she has provided Arsenal's only three goals.

Before her strike proved the difference on Wednesday she scored the only goal against Everton in the league on Saturday, while her header in Italy secured a point against Juventus a fortnight ago.

The Dutch forward was granted a leave of absence in November and spoke this week about the importance of players not being afraid to take breaks should they need to.

It seems that break has worked a treat as their all-time top goalscorer looked her usual dynamic self, dropping deep to win the ball back and creating chances.

England captain Leah Williamson started her first match since returning from a foot injury and Rafaelle Souza replaced her in the second half, making her first appearance on her comeback from injury.

Attempt missed. Lisa Boattin (Juventus Femminile) left footed shot from outside the box is too high. Assisted by Linda Sembrant.

Attempt missed. Jordan Nobbs (Arsenal Women) right footed shot from the centre of the box misses to the left. Assisted by Vivianne Miedema.

Lia Wälti (Arsenal Women) wins a free kick in the defensive half.

Attempt saved. Julia Grosso (Juventus Femminile) left footed shot from outside the box is saved in the centre of the goal. Assisted by Martina Lenzini.

Lia Wälti (Arsenal Women) wins a free kick in the defensive half.