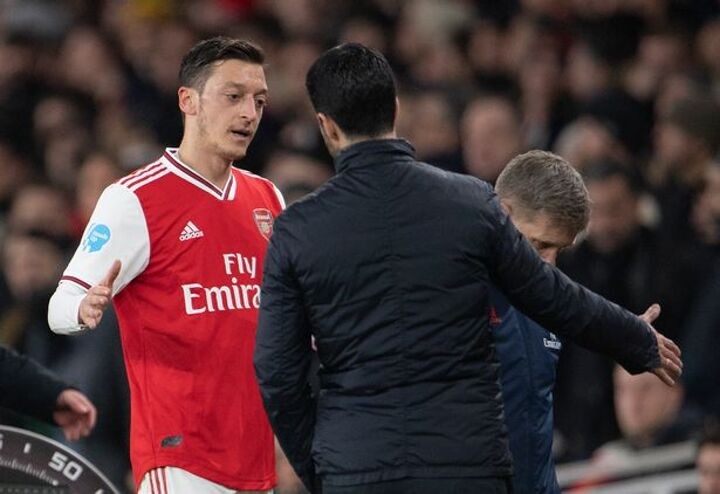 Arsenal continued their promising start to the season with a hard-fought 2-1 victory over Rapid Vienna on Thursday night, earning their three points in their opening Europa League match in the process.

Most poignantly, Thomas Partey made his first start for the club following his £45 million move to the club from Atletico Madrid in the summer.

Meanwhile, the Mesut Ozil situation continues to explode. Ozil, Mikel Arteta, and now his agent have all had their say on his prospects at the club, with an exit now increasingly likely. in the summer. The midfielder impressed greatly, and we have an update on the reaction to his performance here.

And just because the transfer window has now shut does not mean that Arsenal cannot make plans for the future. We have an update on a potential striker target next summer.

Mikel Arteta praised new signing Thomas Partey after the midfielder made his first start in Arsenal’s 2-1 win over Rapid Vienna on Thursday night.

Partey, who made a brief cameo from off the bench against Manchester City, played the full 90 minutes and impressed throughout, sauntering through the match as his qualities shone through.

“He looked really solid and really comfortable,” Arteta said afterwards. “I think he held the midfield by himself in the second half when we were a little more open and started to take more chances and attacking certain spaces with some players. But I think he was fantastic tonight and there is much more to come from him.”

Arteta also added that Partey cannot do it alone and that he needs support from those around him.

“He needs his team-mates around him,” the former Arsenal midfielder continued. “It's not about him. We know that with the price that we paid for him and the profile of the player that he is, that he's going to have a lot of people looking at him every single game.

“But this is about the structure we have as a team and the flow, the unity and the cohesion that we need in our team and he is one piece of that and hopefully he's a big piece.”

Despite only losing him three years previously, Arsenal are also prepared to re-sign striker Donyell Malen, who has impressed with an excellent scoring record for PSV Eindhoven in the Eredivisie.

Malen made his first-team debut for PSV in 2018 and has since scored 33 goals in 78 appearances. He has also provided 16 assists in that time. Now 21, he has scored five goals in seven outings so far this season.

Per Soccernews via Sports Mole, Arsenal are keen to add the centre-forward next summer, though they will face competition from Juventus and Barcelona.

Pierre-Emerick Aubameyang signed a new three-year deal this summer, but Alexandre Lacazette will have a year remaining on his contract next summer and will be 30 by the end of the season.

Arteta was the only one to be impressed with Partey’s first full 90-minute showing.

BT Sport pundit Martin Keown was pleased with Partey’s display, stating that the Ghanian “oozed class”, comparing him to Patrick Vieira, one of Arsenal’s greatest-ever players.

“I think you know when you see a player immediately add that touch of class, who wants to play and makes things happen,” he said on the BT Sport broadcast. “He's so silky smooth, he's oozed class and been everywhere.

“This is where he looks like Vieira for me when he's travelling with the ball and making things happen.”

After being left out of the Premier League and Europa League squads, Mesut Ozil faces an uncertain future at Arsenal. In the final year of his contract and having seemingly played his final game for the club, the highest-paid player in the squad has been extradited from the first-team set-up.

Ozil, Arsenal, and Arteta have been embroiled in a PR war this week following the decisions, and now the German’s agent, Dr. Erkut Sogut, has heavily criticised Arteta’s handling of the situation, throwing yet more fire onto an already incendiary situation.

Speaking to ESPN, Sogut said: “Arsenal fans deserve an honest explanation, not [Arteta] saying, 'I failed Ozil.' You didn't fail Ozil. You failed to be fair, honest and transparent and treat someone with respect who has a contract and was loyal all the time.

“Every single person outside knows he hasn't treated him fairly. He didn't give him a chance to show himself this season. If he is still under contract, the player should have the option to stay and fight for his place. Mesut hasn't been given that. Why would you put a player on the bench twice for 90 minutes [against Brighton and Crystal Palace in June] if he wasn't fit or committed?

“Everyone says he's training well. Per Mertesacker [Arsenal defender, 2011-18 and now a coach at the club's academy] said this publicly. I spoke with at least five teammates who say he is training great. They say Mesut is one of their best players, and they cannot understand why he is left out. So it can't be the training. If it is not the pitch, what are the footballing reasons? If you talk, you should tell the truth that the Arsenal fans deserve, otherwise don't talk at all.”

The comments only drive a greater rift between the player and the club, furthering the suggestion that Ozil will leave Arsenal in the very near future.