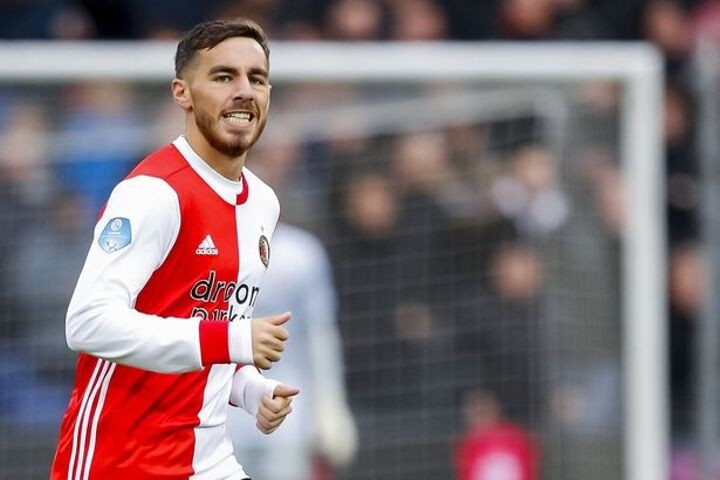 Arsenal are facing a crucial summer in the transfer market as Mikel Arteta seeks to improve his squad after a disappointing season at the Emirates.

The Gunners are clinging onto a spot in the top-half of the Premier League, while their Europa League quarter-final tie with Slavia Prague is precariously balanced.

That all means that Arteta will need reinforcements if he is to turnaround the club’s fortunes and relieve the pressure that is developing on his future.

With the squad still containing a fair amount of deadwood, departures will also be on the cards when the window opens.

Arsenal are targeting Feyenoord midfielder Orkun Kokcu for a summer transfer, but reports suggest they are facing a battle with North London rivals Tottenham for his signature.

Kokcu has scored twice in 17 games for the Dutch side as they sit fifth in the Eredivisie, but has impressed for Dick Advocaat’s side.

That has seen him become a target for Arsenal, but the Daily Mail now report that Spurs also have their eye on the 20-year-old and have have spoken to his representatives about a potential move.

Gunners outcast Konstantinos Mavropanos has opened the door to a return to current loan club says VfB Stuttgart next season.

The Greek defender has made just three Premier League appearances since joining the club in 2018 and was sent out to Bundesliga side Stuttgart on a season-long loan last summer.

And after making 17 appearances for his loan club as they have all but guaranteed safety in their first season back in the top-flight, Mavropanos has revealed he is willing to return to the Mercedes-Benz Arena.

“The door at VfB is open for me [to stay another year] – that’s very good, but I can only think specifically about the future when we have talks with Arsenal for the new season,” he told BILD.

Fluminese midfielder Matheus Martinelli is being scouted by Arsenal ahead of a potential £35million summer transfer.

That is according to Globo Esporte, who state the Gunners have been impressed with the 19-year-old, despite him only making his debut in December 2020.

But the Brazilian outlet also state that a move for Martinelli will not happen if Arsenal are able to bring Martin Odegaard back either on another loan or permanently.