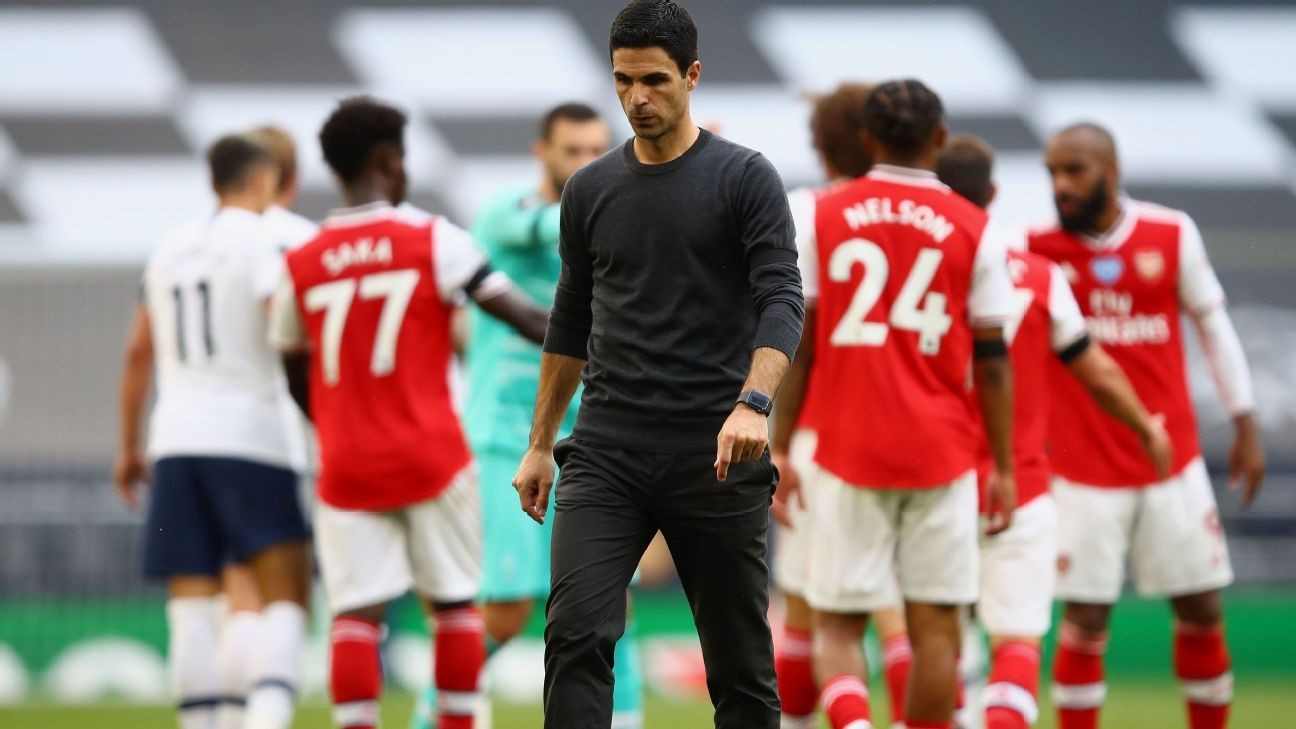 Arsenal manager Mikel Arteta said his side had "given away" the points in a 2-1 Premier League defeat by north London rivals Tottenham Hotspur on Sunday -- a result that damaged his side's hopes of sealing a European place.

- Check the latest Premier League standings
- Stream ESPN FC Daily on ESPN+
- What did you miss? The latest from Europe's top leagues

Arsenal took the lead at Spurs thanks to Alexandre Lacazette's unstoppable drive, but a defensive mistake allowed Son Heung-Min to equalise soon after before Toby Alderweireld gave Tottenham victory late on with a header from a corner.

Arsenal, Spurs both need defensive overhauls to get back to the topAlderweireld, Son both 8/10 as Spurs leap rivals ArsenalLuiz 5/10 as Arsenal lose North London derby to Spurs

"We gave them the game again, an individual error and the set-piece that cost us three points again," said Arteta, after his first north London derby as a manager.

"But I'm extremely proud of the way the team played. This is who we are, it doesn't matter in which ground we will come here and do what we've done today, nullify the opponent and force them to kick the ball long and give it back to us.

"We talked about it before the game today that set-pieces in this game are crucial, and today it cost us the three points."

The result left Arsenal below Tottenham in ninth spot in the standings with three games remaining and with their hopes of qualifying for the Europa League receding.

His Tottenham counterpart Jose Mourinho was full of praise for his side who have come in for criticism of late after some turgid displays.

"To beat big clubs is always great and when the specific big club is your biggest rival historically it means the world," Mourinho said. "My boys had 48 hours less to prepare which is very unfair, but even with that they were fantastic in their commitment and deserved the victory."

Tottenham's hopes of another Champions League campaign are all but over but they are only three points behind sixth-placed Wolverhampton Wanderers with three games remaining.

"The Europa League is not the biggest competition in Europe but it's the second," said Mourinho, who won the competition with Manchester United. "I prefer to play Europa League than not to. I think it's a title Tottenham would like to get."