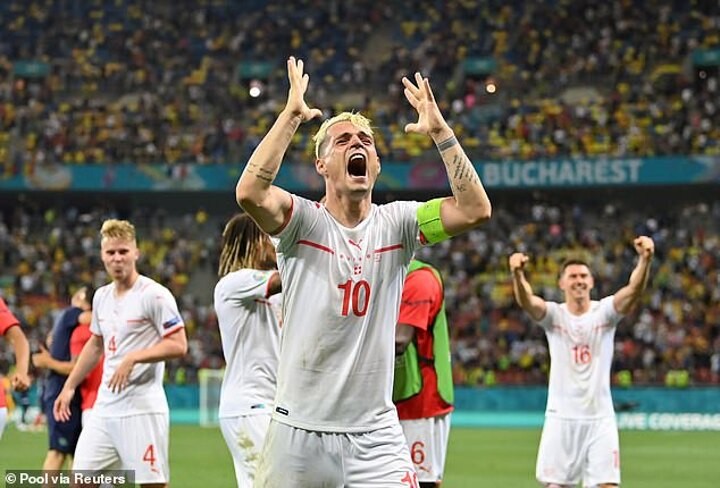 Roma are finally on the brink of wrapping up a deal for Arsenal midfielder Granit Xhaka, according to reports.

Roma have been in pursuit of Xhaka all summer, with new boss Jose Mourinho making the Switzerland captain a priority transfer target, but they have yet to stump up the required cash.

But according to Sky Sport Italia, the final details for Xhaka's transfer to Roma are now being ironed out.

The report also claims that plans are on track for Xhaka - whose Arsenal deal expires in June 2023 - to join up with his new Roma team-mates on their pre-season tour of Portugal next week.

Xhaka has already agreed personal terms with Roma worth a reported £2.1million until June 2025 but striking up a deal with Arsenal has been much harder.

The Gunners have not budged on their £17m asking price for their former captain.

But the report claims that Roma are now trying to bridge the £17m fee by throwing in some performance-related bonuses and add-ons.

And now with Arsenal having signed midfielder Albert Sambi Lokonga from Anderlecht in a £17m deal, they have been more receptive to Roma.

Xhaka is a familiar face to Mourinho, who clearly admires the midfielder from his days managing in the Premier League.

The pair most recently were bitter rivals in the Premier League, with Arsenal midfielder Xhaka coming up against Mourinho at Tottenham before his sacking in April.

For the majority of Xhaka's career at Arsenal, the midfielder has divided opinion among fans due to his inconsistent displays - and was involved in a controversial spat with supporters after he was jeered off during their Premier League home match against Crystal Palace in October 2019.

However, Xhaka now appears to be heading for the exit door fresh off the back of some brilliant displays at the Euros with Switzerland.