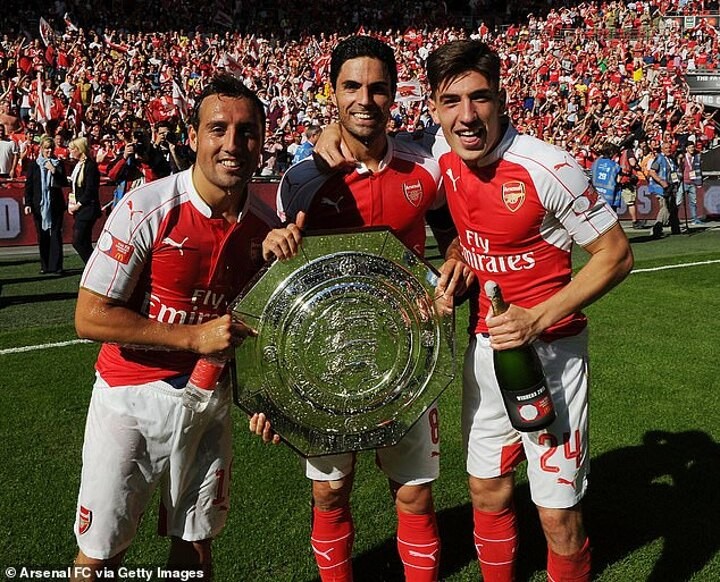 Hector Bellerin says Mikel Arteta has been like a 'big brother' and admitted he tried to keep him out of trouble when he made his first-team breakthrough.

The two Spaniards both joined Arsenal in 2011, with Bellerin joining as a scholar from Barcelona while Arteta had made the move from Everton.

The right back, who Arteta has since made vice-captain, admitted that he was 'naughty' during his early days at Arsenal but was kept on the right path by his team-mate and current manager.

The defender speaks openly in a new documentary series - 'Unseen Journey' - which follows his recovery and comeback from an anterior cruciate ligament injury.

'I'd only been at Arsenal for a couple of years, Mikel was one of the captains in the dressing room, he was part of this Spanish speaking group that we had and he really did look after me.

'When I was young, I was a bit naughty, started getting money, I started meeting girls, started going out, all these things that everyone does at that age.

'But not everyone has the responsibility that I had at that time, starting to play for Arsenal first team.

'He was like a big brother, when I did something wrong, he looked at me and I was like: 'Oh, I shouldn't have done that.' Sometimes you need people to be honest with you.'

Bellerin also admitted he spent too much time going out and drinking while he was sidelined with the knee injury from January 2019 to the start of last year.

The defender credited one of Arsenal's conditioning coaches for getting him back on the right path before he returned to help the club win the FA Cup at the end of the 2019-2020 campaign.

'At a time when I wasn't competing, I wasn't me because I didn't have football, my life, I defaulted to those things - the going out, drinking, not taking care of myself as I should do.

'You don't always get that in football where there's such a difference between staff and the players. He was honest with me, opened my eyes and since that day, I was like: 'Hector, what the f*** are you going, get your s*** together.'

'There's loads of ups and downs in this process. It took him to tell me to be the best I could be, you can do all the exercises, all the stuff, the tablets, but it's also about the other 18 hours at the training ground.'