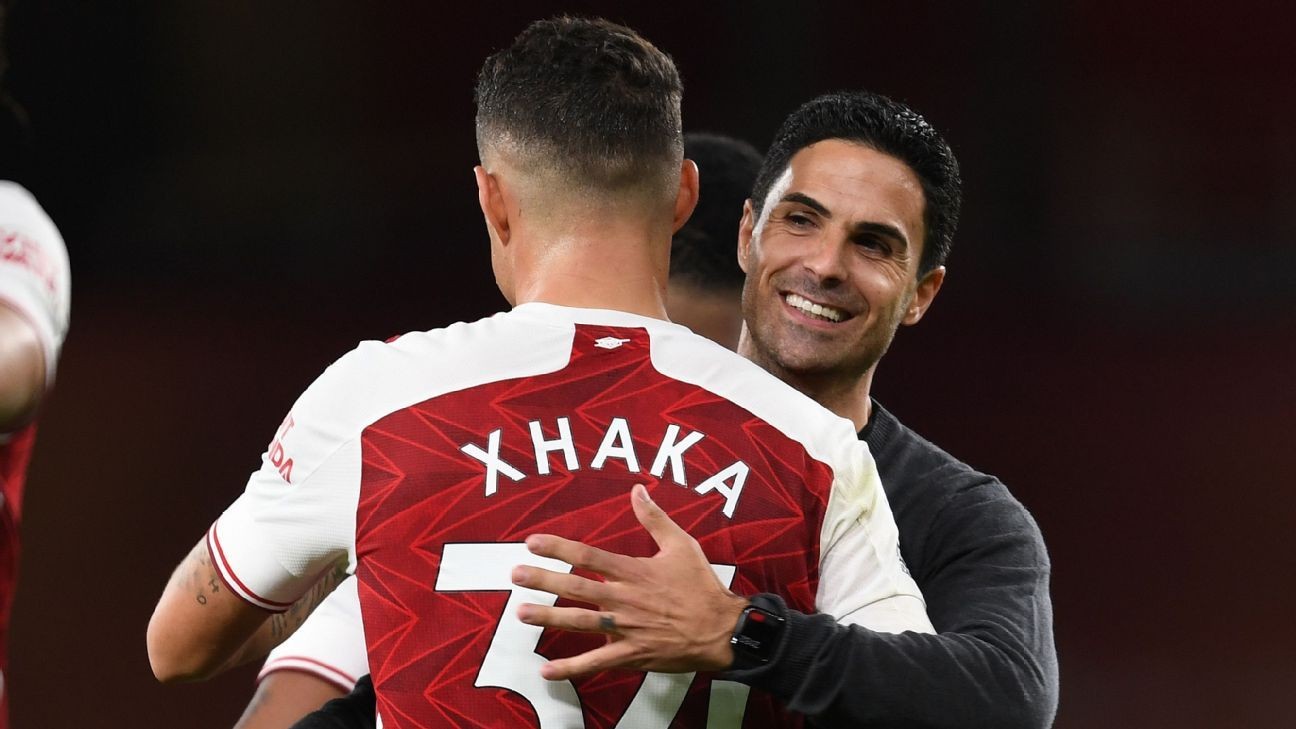 Arsenal head coach Mikel Arteta wants to sign two midfielders before the transfer window closes, and with good reason. The Gunners' fortitude is worthy of note in mustering enough quality to edge past a spirited West Ham side here at Emirates Stadium, but they won't always be this lucky.

Hammers boss David Moyes rued a series of second-half chances with the score at 1-1 during a period in which the visitors were firmly in the ascendancy having assumed control of midfield in a way that will alarm Arteta. Dani Ceballos and Granit Xhaka have been a highly effective central-midfield pairing since football's resumption, but the lack of depth in that position was exemplified by the presence of just Mohamed Elneny on the bench to alter a plan that clearly wasn't working.

Elneny himself is in the midst of a surprising renaissance having spent last season on loan at Besiktas while Matteo Guendouzi remains in matchday exile and Lucas Torreira closes in on a move to Italy. The club want to pursue deals for Atletico Madrid's Thomas Partey and Lyon's Houssem Aouar, but neither transfer is imminent with sales pivotal to funding both potential incomings. Arteta was understandably swift to defend Ceballos and Xhaka afterwards but hinted at the possibility of further additions.

"[Ceballos and Xhaka] have been really good since I joined the club and [Elneny], every time he played, he deserved to play again today but I just wanted to rotate," Arteta said. "I thought it was a game where we were going to have to attack more the spaces and the way they defended, we wanted to create some situations with Dani there. But if we can strengthen the team, we are going to try to do it until the market is gone, but everything is still open.

"Depending on what happens with some other players in the squad, we are open. The market can surprise us. It can come for one of our players in a different position and then we have to react, like it happened with [Emiliano Martinez] (who was sold to Aston Villa this week for £20 million) so let's see what happens."

The need to complete that business is only underlined by what took place here, particularly after an opening 45 minutes in which Alexandre Lacazette scored and Michail Antonio equalised.

Lacazette gets Arsenal going in 8/10 performance as Gunners eke out winArteta feared Aubameyang would leave ArsenalPirlo at Juve, Lampard at Chelsea, Arteta at Arsenal: Why so many top clubs are going with former stars

Arsenal are targeting Champions League qualification this season, and to achieve that aim they cannot rely solely on the highly effective counterattacking approach that delivered their 14th FA Cup success last month. They will encounter teams as well organised as West Ham were and others that will not pass up so many promising situations with the game in the balance.

There were issues elsewhere. Kieran Tierney sustained a hip problem in the warmup, forcing a late change with Sead Kolasinac drafted into defence. Not many expect Kolasinac to be at the club after the transfer window closes on Oct. 5, with Bayer Leverkusen interested in taking the 27-year-old back to Germany, but the problem is more complex than relying on a player with an uncertain future.

Arteta's tactical deployment has Arsenal in a 5-3-2 shape without the ball, shifting to a back four in possession. That shape relies heavily on the left-sided centre-back -- usually Tierney -- to understand the positional nuances with the physical conditioning to shift quickly when, in this case Bukayo Saka, moves forward from left wing-back.

Kolasinac is not at an optimum fitness level and Arteta could be heard regularly shouting at "Kola" when Arsenal's shape looked suspect. It was, therefore, no surprise when the Hammers' equaliser came from that side of the pitch, Ryan Fredericks overlapping to cross for Antonio to convert from close range.

However, this was precisely the type of game Arsenal would have lost under Arteta's predecessor Unai Emery and they deserve credit for their perseverance, conjuring a winning goal against the run of play. Saka fed Ceballos with a delightful pass and the latter squared the ball for substitute Eddie Nketiah to score four minutes from time.

That combination producing the winning goal was a particularly poignant example of the unity Arteta has engendered given the pair clashed in the rondo warmup prior to last Saturday's win at Fulham. Nketiah reacted to what he believed was an over-zealous challenge. Arteta claimed in his pre-match news conference that the matter had been consigned to history and so it proved.

"That is the beauty of this sport, that they were in the highlights last week for something that happened between them that was a bit negative and then today they found a way to understand each other and create the winning goal," said Arteta.

With Ceballos providing the decisive moment by bursting forward from central midfield, it could be assumed that area of the pitch provides sufficient potency and protection for this Arsenal team.Yet it should not mask what went before. Thomas, capable of playing as a box-to-box midfielder, and Aouar, a stylish playmaker, would have been tempting options here, sharing the workload in the engine room over what will be an intense campaign.

Spending money is never a guaranteed panacea, but Arteta's motives for the final fortnight of the window make an awful lot of sense.