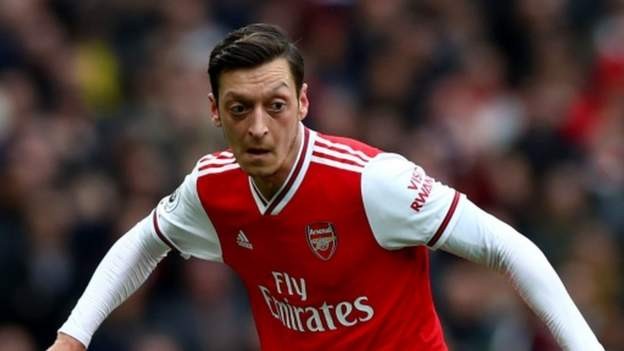 The 32-year-old still has half a season left on his Arsenal contract but both parties are in advanced talks which they expect to lead to an agreement to terminate it.

That would pave the way for the move to Istanbul in the coming days.

Ozil has not played for Arsenal since a 1-0 win over West Ham in March and has been frozen out by boss Mikel Arteta.

He joined the club in a £42.4m move from Real Madrid in 2013 and helped them win the FA Cup three times.

Ozil spoke of his admiration for the Turkish side during a social media question-and-answer session during the week.

"Fenerbahce is like Real Madrid in Spain. The biggest club in the country," he told followers.

Media reports in Turkey earlier this month claimed Fenerbahce would be signing Ozil in January.

And when asked about that manager Arteta said a move would only happen if it was "the best solution for everybody".

Ozil was born in Germany but has Turkish heritage, and Fenerbahce chairman Ali Koc has said previously that signing Ozil was a "nice dream".

In 2019 the 19-time Super Lig champions ruled out a move for Ozil for "economic" reasons.

Having started the first 10 games since Arteta's appointment in December 2019, Ozil has not featured since football restarted after the first wave of the coronavirus pandemic in June.

Although Ozil said last summer that he would stay with Arsenal "through to the last day" of his contract in June 2021, Arteta left him out of both their Europa League and Premier League squads this season.

He became the highest-paid player in the club's history in January 2018, but refused to take a pay cut during the summer, with no football being played and Arsenal looking to balance the books.

Major League Soccer's DC United had also been strongly linked with a January move for the midfielder.

Ozil helped Germany win the 2014 World Cup but retired from international football in 2018, citing the "racism and disrespect" he has faced in Germany over his Turkish roots.

He was criticised after being photographed with Turkish president Recep Tayyip Erdogan at a London event in May, and Erdogan was even the best man at Ozil's wedding in June 2019.