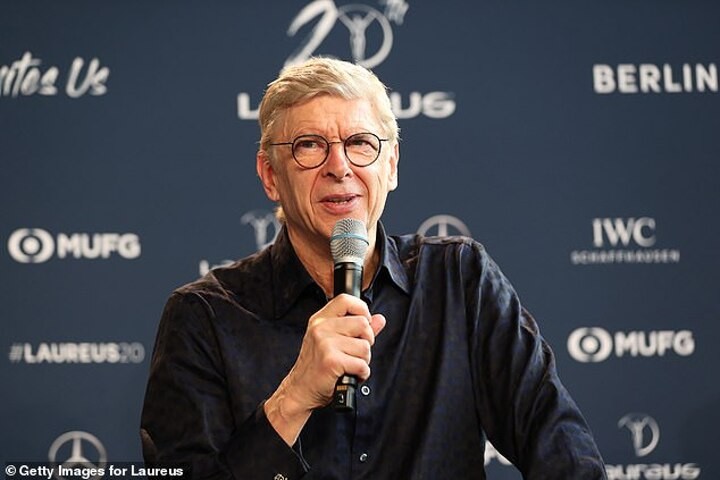 Arsene Wenger's radical idea to change the offside rule – which would see a player deemed onside if any part of them that can score a goal is in line with the second-last defender – has been presented to FIFA president Gianni Infantino.

The former Arsenal manager is now FIFA's chief of global football development and is leading the charge to change how the beautiful game is played.

Infantino said Wenger had given a presentation on a proposed change to the offside law – with the controversial idea being considered by FIFA's top men.

'We have been seeing that maybe we can think about a new law which allows a bit more attack in football,' said Infantino.

Football Association chief executive Mark Bullingham said on the offside law: 'Our role in football is to strive for continuous improvement.

'Semi-automated offsides would be a real step forward. The fan experience is negatively impacted by waiting to see if a goal has been scored.'

While offsides have been scrutinised as of late, the way VAR is being implemented in England has also come under attack.

Scott Parker's Fulham side were denied an equalising goal against Tottenham, with Davinson Sanchez's clearance striking Mario Lemina on the arm, which was by his side, before eventually falling into Josh Maja's feet to score past Hugo Lloris.

Parker said VAR was 'killing every part' of the excitement and emotion in football in the wake of his side's defeat by Spurs.

But Infantino launched a staunch defence of the system on Friday, saying: 'VAR is giving and bringing more justice to the game, making the game more clean and helping referees in taking the correct decisions.

'If it is taking away joy from some it gives the joy to others (when a decision is changed in favour of their team).

'Everyone prefers to win a game based on the right decision of the referee.

'It is unimaginable to think of football without VAR.'

The IFAB also clarified the interpretation of the offside law, saying the definition for handball, whereby the arm ends at the bottom of the armpit, must be used when judging whether a player is offside or not.

Chelsea's Timo Werner was denied a goal against Liverpool on Thursday night when VAR ruled his arm had been offside in the build-up.

Infantino revealed semi-automated offside technology was trialled at the recent Club World Cup and said he 'cannot exclude' the possibility of it being used at the 2022 World Cup.

Wenger revealed his controversial ideas last year, which included changing throw-ins to 'kick-ins', out-swinging corner kicks being allowed to go out of play before curling back in and free-kicks would be allowed to be taken with the player passing it to themselves.