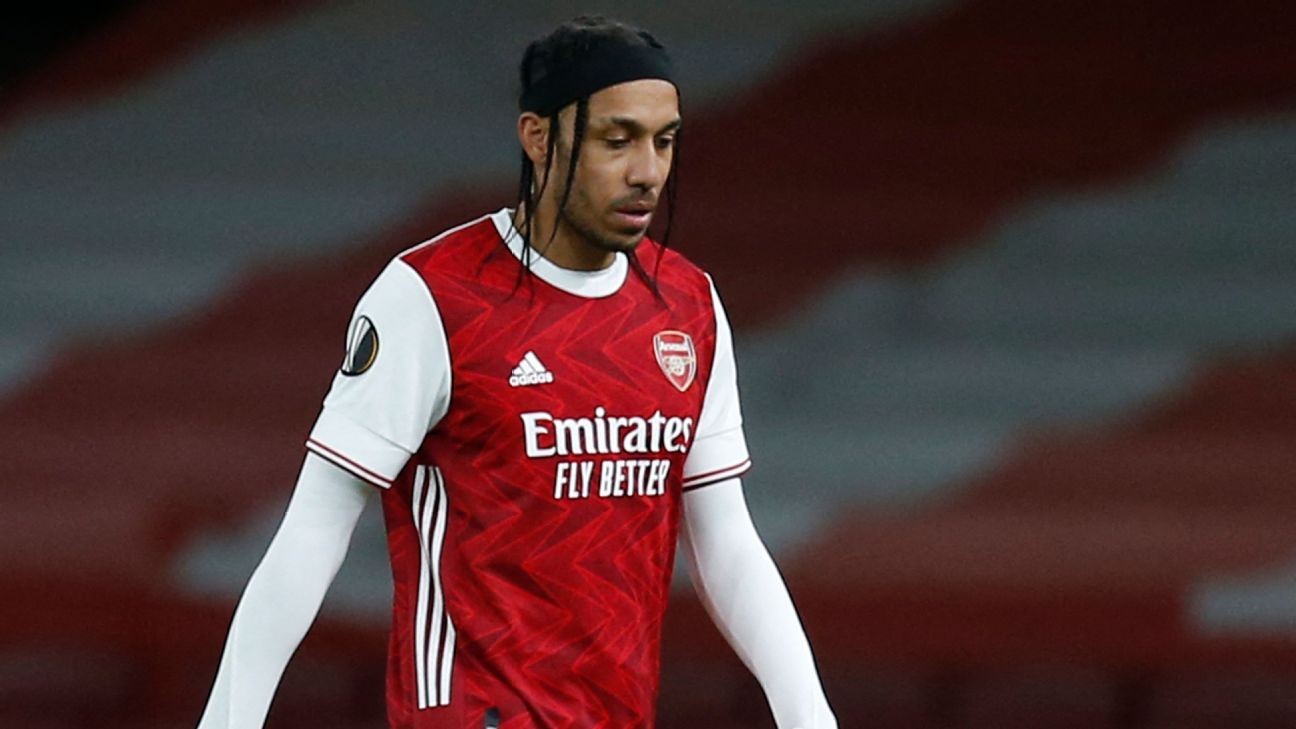 Mikel Arteta has insisted Pierre-Emerick Aubameyang remains central to his plans despite the Arsenal captain becoming an infrequent starter in recent weeks.

The 31-year-old is unlikely to be fit for Sunday's Premier League home game against Fulham after revealing he had spent two days in hospital this week having been diagnosed with malaria following international duty with Gabon last month.

Aubameyang is now at home recovering and yet to train with the first-team since leaving hospital. Sources have told ESPN that although Arteta has not ruled him out of contention against Fulham, next Friday's match against Everton is a more realistic return date.

However, Aubameyang's place in the team was already in doubt, ever since being dropped for the north London derby win over Tottenham on 14 March after reporting late to the training ground on the day of the game.

Despite being club captain and a prolific striker during his time at the club -- scoring 63 league goals in 110 appearances -- Arteta substituted Aubameyang when Arsenal were losing against West Ham United and Liverpool before leaving him on the bench for last week's Europa League quarterfinal, first leg against Slavia Prague.

Pierre-Emerick Aubameyang has struggled to find his best form for Arsenal this season. Photo by IAN KINGTON/AFP via Getty Images

Arsenal delivered their best performance of the season in Thurday's second leg, winning 4-0 on the night to progress 5-1 on aggregate, fuelling claims in some quarters that the club should look to cash in on Aubameyang this summer.

However, Arteta said: "We missed him in a few games last season as well, Auba is a really big part of our team and a really important player in our squad and he will continue to be so.

"You need those players in your team to be successful and that is not going to change overnight because we are winning one or two games [without him].

"It is great that the team has the ability and capacity to resolve when we are missing some important players, the same with David [Luiz], Kieran [Tierney] and many others we have missed like Martin [Odegaard] at the moment.

"It could have a really effect but the team has reacted in a good way, not used any excuses, just faced the challenges ahead of them and get others to raise their individual performance for the team and this is what they are doing."

Aubameyang was handed a three-year contract worth at least £250,000-a-week last summer after playing a pivotal role in Arsenal's successful FA Cup campaign, scoring twice in the semifinal and final.

He has suffered a dip in form this season, however, along with club-record signing Nicolas Pepe, who has struggled to justify his £72 million price tag ever since arriving from Lille in August 2019.

Pepe has thrived in the Europa League, however, registering four goals and four assists including Arsenal's opener in Prague -- only Roma's Borja Mayoral has contributed more -- and Arteta believes the time has come for him to deliver on a regular basis.

"He needed a period of adaptation and that is gone now," Arteta added. "So we cannot rely on adaptation again, now it is about performance and he can do it.

"He has got the players to support him, a manager that trusts him, he has got all the staff that are willing to help him and all the team mates who really like him because he is a really likeable character so there are no excuses."