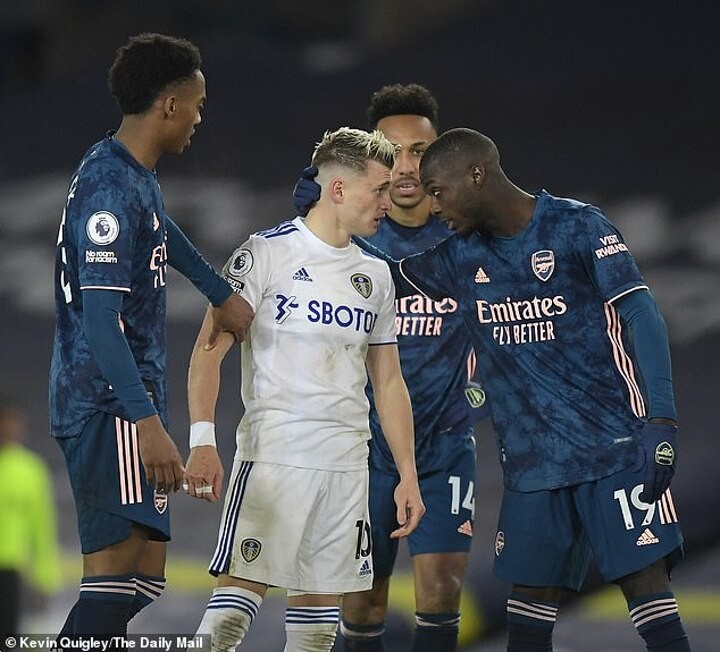 Mikel Arteta has told Nicolas Pepe that his Arsenal fate is completely in his own hands after his red card against Leeds.

Pepe is set for an immediate chance to redeem himself in Arsenal’s Europa League tie at Molde on Thursday following his needless dismissal for headbutting Leeds midfielder Ezgjan Alioski.

Arteta hit out at Pepe following the game, saying his actions were ‘unacceptable’ and that he had ‘let his team down.’

But he is now keen to move on after Pepe apologised both privately and publicly on social media.

Winger Pepe, 25, has so far failed to live up to his £72m price tag since joining Arsenal, showing flashes of his ability but not on a consistent basis.

Arteta emphatically dismissed the suggestion that Sunday’s incident has left his Arsenal future on the line but he admitted his demands will be high, with Pepe’s talent not in doubt, and the Ivory Coast star has to be ready to meet them.

Arteta said: ‘He needs to feel that myself and the club are going to protect him and we are giving him time. He needed time last year to adapt to the Premier League, a new city, a new language, a new environment, and you can see at the end of the season the way he was starting to play.

‘The demand with him, with his ability – I am going to be very demanding because I know what he can do and he needs to deal with that.

'I think he's dealing with it the right way, the other day he had a reaction and when you're out on that pitch it's completely different to being outside when trying to understand it, but he has reacted the right way and hopefully I can see a player that shows that every week. It's in his hands, honestly.

‘It's a player I really like, I know what he can give us and it's completely down to him.

‘The club made a huge investment in him and obviously people expect a lot from him because he has this quality. I said many times, with the strikers and attacking players it’s the most difficult thing to be consistent when you have to create, when you have to unlock the door and score goals and make assists.

‘But this is why he is here, and he needs to embrace that challenge and go for it. We have to provide the best possible scenarios for him to be able to do that.

‘The way he apologised, he understood his responsibility and hopefully [against Molde] we can see the player we want to see, have a good reaction and help his team.’

While the Leeds game was just his second Premier League start, Pepe has caught the eye in Europe, scoring two of his three goals and both of his assists this season coming in the Europa League.

Group B leaders Arsenal can guarantee their qualification for the knockout stages by bettering Rapid Vienna’s result against Dundalk.

With the hectic December schedule in mind, Arteta urged his players to get the job done at the first possible opportunity.

He said: ‘In football when you have the chance to grab something, do it in that moment. Because you don't know what's going to happen in a week's time, in two weeks' time, in any game.

'There are a lot of things that can happen so I will tell the players: when you have it, you can do it today, do it and then forget about it and let's move on.’