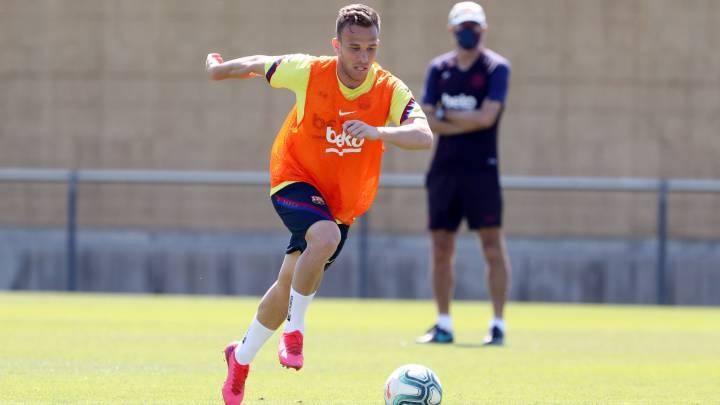 The Brazilian has said he wants to stay but the club have not ruled out moving on from the player, who has not performed consistently during his two years there.

Arthur's situation at Barcelona is still open to change, several sources at the club have told AS. The statement released by the Brazilian on 29 April was not enough to kill speculation over his future. Neither was news of a meeting with Eric Abidal and Ramon Planes, which was leaked to the press, in which he rejected the idea of playing at Juventus next season.

"We are not ruling anything out," said a source inside Barcelona. "We'll see what he thinks in the summer." The Brazilian is still on the table when it comes to potential future moves. Barcelona are keen on Miralem Pjanic and are also eyeing up Lautaro Martínez.

Something has quite sat right between Arthur and Barcelona for some time. There has been somewhat of a cold war between the two parties now for a while and they remain distant. The Brazilian has a long-term contract until 2024 and has the ball in his court. He is obsessed with making a success of himself at the club. Those close to the midfielder say he used the confinement to disconnect and forget about the physical problems he has been having this season. The 22-year-old has struggled with ankle and hip problems this year and lost a step in Setien's side.

Barcelona want to solidify the middle of the field and want Pjanic. They know Arthur is a player with a high value given his age and projection. They are also aware, however, that he hasn't settled properly at the club where you have to hit the ground running. In two season, Arthur has stuttered too many times to be considered a success. That's why they have opened the door for him to leave.