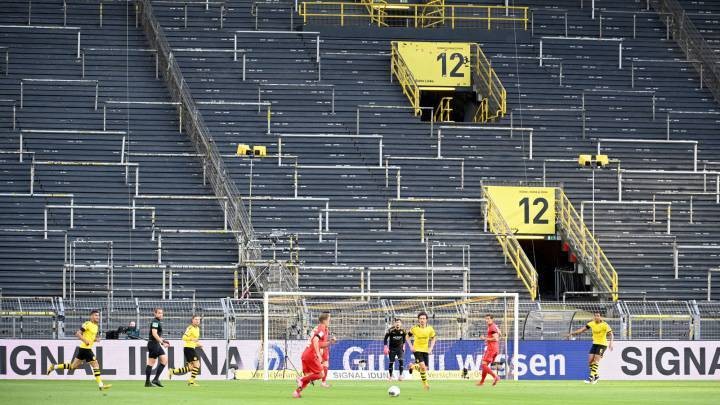 Reports have suggested that broadcasters may offer the option for viewers to add artificial crowd noise to add atmosphere to behind-closed-doors fixtures.

The Premier League has become one of the most popular sporting competitions in the world and that is in large part due to the spectacle that it provides for the television audience. The Times has reported that broadcasters are planning to give viewers the option to add artificial crowd noise to their coverage of Premier League games. The fan-like audio would likely be controlled in real-time by sound engineers to ensure the noise reflects the action on the pitch.

The final decision on implementation would be taken by the individual broadcasters (the BBC, Sky Sports, BT Sport and Amazon Prime have all secured rights for games) but some are concerned that it could undermine the importance of fans.

How would this work?

The Premier League is not the first sports league to consider similar proposals and Australia’s National Rugby League (NRL) introduced artificial crowd noise for a fixture between the Eels and the Broncos on Thursday night. The game was aired by Fox Sports and Australian broadcaster Nine, with each providing their own audio.

Fox Sport produced the crowd noise themselves, but Nine employed a specific sound engineering company to create a more tailored audio product. The Sydney Morning Herald spoke to Simon Fordham (Nine’s head of NRL) and he explained how a combination of sophisticated software and real-time audio operators allowed them to ensure the game sounded as realistic as possible.

They used a “non-repetitive loop or a ‘buzz track’ at a base level” for general play, and allow an operator to “increase not only the volume of the crowd noise in the mix but also expand its intensity” during climactic moments. They even take the popularity of each side into consideration and ensure that the home side draws a greater reaction from the ‘crowd’ than the away team. However, to ensure that it does not affect the action on the pitch, the sound will not be played inside the stadium.

The J-League is expected to have resumed by early July and Japanese tech manufacturer Yamaha have developed a smartphone app to allow fans to contribute to the atmosphere from their home. The Remote Cheerer system will allow fans to select cheers, chants and boos, which will then be played on speakers set up in the empty stands. The volume of the in-stadium noise will reflect how many users selected that option at any given time.

American viewers tuning in to Fox Sport 1’s coverage of the Bundesliga have already had the option to add artificial crowd noise to games played behind closed doors. Sports journalist Arash Markazi of the LA Times posted a video of the coverage on Twitter and seemed impressed with the overall effect.

Others commented that they had also enjoyed the introduction and praised the Bundesliga for the move in unusual circumstances.

However, some are worried about the precedent it sets in seeing real-life supporters as dispensable. One Twitter user was concerned that introducing artificial noise into stadiums could see it become more widespread in future as teams look to create a better atmosphere.