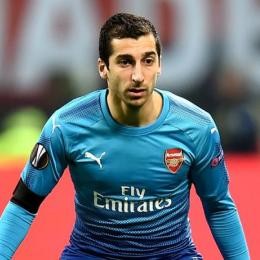 Attending his first press conference as an AS Roma player, Armenian star attacking midfielder Henrikh Mkhitaryan stated: “I am happy to be here. I went through some hard times before coming here, and here I am now, starting a new adventure. I know where I am, and I know I'm playing for an important team. I'm aware of the club's goals, and, of course, I will do my best to help achieve those goals. I met my teammates for the first time today. There's a very good group, locker room-wise for starters. I met the coach for the first time too, and I can say this team has a very bright future.”

I can cover every offensive position. From the right, the left, or behind the striker. I feel more useful when I am helping the team. I don’t think there is a big difference playing from the right or the left, because in the end you are coming inside. I think that is my quality, to cut in from the flank towards the middle – so I think I can be useful to the squad with my qualities. It was my first day, and, yes, I met the players I've just been playing against with my national team. We discussed a bit the game against Italy with Alessandro [Florenzi], and we also discussed about AS Roma and Italy. Same goes for Edin [Dzeko]: we talked about the game, and today, during the training session, we had the opportunity to discuss more about the game, the episodes, the goals, and everything else. But now I think the national team is behind us, and we have to be focused on the games Roma have.

I have been following Shakhtar’s games in the Champions League and in the league, back when Fonseca was training them. I haven’t been analyzing the game in detail, but I have been watching, and they have been playing very impressive football, very offensive. That is what was impressing me, a side like Shakhtar playing very offensive against big clubs. They won some of those games, and I hope he can bring that quality to Roma too, so we can play offensive style, and make the fans excited.

The reason why Arsenal loaned me out? It is a hard question. It’s difficult for me to say - I am not in the Arsenal board, I cannot say. I think a lot was due to the fact I wished to leave. I knew I was not going to play a lot, and maybe I would have sit on the bench, like I did the last three games before the international break. I knew here I would have more opportunity to play, because there is the league, the cup, the Europa League. The decision was not easy for Arsenal to let me go, but thanks to Roma’s sporting director and board they were able to do it, and hopefully I can show why they wanted to do that”.