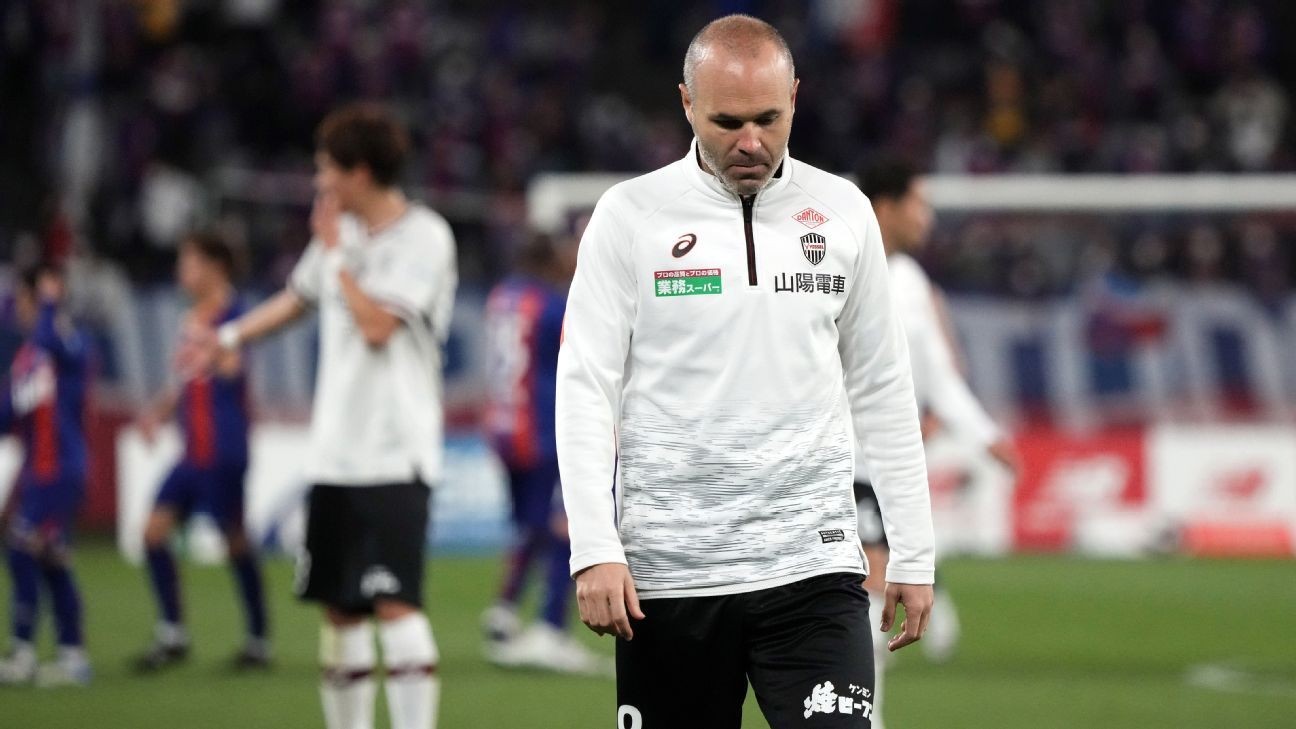 In a week's time, Vissel Kobe will return to continental action and resume their bid to win the AFC Champions League.

First up is a Round of 16 tie against compatriots Yokohama F. Marinos on Aug. 18 and, with the subsequent two knockout-round stages in the East Zone to be completed by the following seven days, it will not be long before they know if they are headed for next February's final.

Vying for continental glory is exactly the position Vissel are expected to be for all the star power they boast, headlined by Spanish legend Andres Iniesta and fellow ex-Barcelona men Bojan Krkic and Sergi Samper, as well as a whole host of Japan internationals who all boast European experience such as Yuya Osako, Yoshinori Muto, Hotaru Yamaguchi and Gotoku Sakai.

What is less expected -- and in fact, a huge shock -- is that, with ten games remaining in their domestic J1 League season, Vissel find themselves rock bottom of the table.

It is impossible to say whether it is more condemning that an attack featuring Osako, Muto and Bojan while being supplied by Iniesta and Yamaguchi has only managed 21 goals, or that a seasoned defence marshalled by experienced campaigners like Sakai and Tomoaki Makino has conceded 32.

(For comparison, top-of-the-table Marinos lead the way in goals scored with 51, while Avispa Fukuoka -- in just their second year back in the top flight -- have the best defensive record of just 20 goals conceded.)

Vissel's domestic woes have already cost both Atsuhiro Miura and Miguel Angel Lotina their jobs -- the latter lasting less than two month -- with the club now searching for a third permanent manager of the campaign.

In their defence, Vissel have been severely hampered by injury. Samper will likely miss the entire season with a cruciate ligament injury, Iniesta has spent spells on the sidelines, while Bojan, Muto and reliable centre-back Ryuho Kikuchi have been the most-recent casualties.

Still, while this wretched luck on the selection front might have excused a club of their stature from challenging for the title, it is dire that they not just find themselves battling relegation -- but at the actual bottom of the standings.

Yoshinori Muto, Vissel Kobe's leading scorer in the J1 League so far this season with five goals, is one of several key players currently sidelined after picking up an injury recently. Hiroki Watanabe/Getty Images

To their credit, Vissel have not shied away from the fact that they are performing well below expectations.

Speaking to ESPN back in April in the midst of the team's 11-game winless start to the season, defender Leo Osaki conceded: "We're not just losing -- we're losing with quality players and I think the players understand that.

"That's where the (added) pressure comes from but we have to face these situations."

There is a precedence for such falls from grace in the J1 League that should serve as stern warnings to Vissel.

In recent times, Gamba Osaka and Cerezo Osaka both suffered relegation in seasons where they advanced into the knockout stages of the ACL. When Urawa Red Diamonds last reached the continental final in 2019, they spent all season flirting with the drop before ultimately finishing safe in 14th place.

Even Jubilo Iwata, Tokyo Verdy, Nagoya Grampus and Kashiwa Reysol have not been immune to relegation despite their status as former champions.

2022 could yet see Vissel finish with a trophy or two in their hands.

Apart from their upcoming ACL assignment, they are through to the last eight of the Emperor's Cup although they were eliminated from the quarterfinals of the J.League Cup by Avispa on Wednesday.

Vissel Kobe have had more joy on the continental front in 2022 having reached the AFC Champions League Round of 16, where they till take on fellow Japanese outfit Yokohama F. Marinos on Aug. 18. Pakawich Damrongkiattisak/Getty Images

But there is a feeling that even a couple of cup triumphs would prove scant consolation if they do indeed find themselves playing in the J2 League next term.

All is not lost for Vissel, for they clearly have immense quality in the ranks. Quality that can certainly get them going on a season-salvaging run.

After all, when they finally picked up their first league victory of 2022 back on May 29, Vissel did go on to win seven of their next nine games (two coming in the Emperor's Cup).

The main issue is that they are fast running out of games to embark on a similar streak, with just ten remaining. And they had better start chalking up some soon.

For their opponents in the final two games of the league campaign? Reigning champions Kawasaki Frontale and current league leaders Marinos, no less.