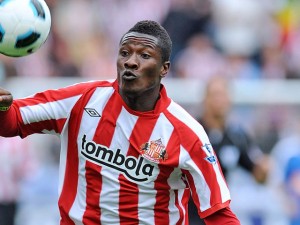 Asamoah Gyan insists he is not keen on leaving English Premiership Sunderland after being linked with moves to Tottenham and Stoke City, the Ghana striker has told MTNFootball.com exclusively.

An agent reportedly touted Gyan's availability via email last week which put clubs on alert for the Ghanaian's signature.

Sunderland chairman Niall Quinn dismissed the email, insisting that it has nothing to do with the club and that Gyan is not for sale.

However, the noises about Gyan's future have refused to go away with German giants Bayern Munich named as the latest club to join the chase.

But in his first reaction to the transfer rumours, Gyan insists he is staying with the Black Cats.

"I am not leaving Sunderland and I am not interested in these rumours in the newspapers and the internet," Gyan told MTNFootball.com exclusively.

"I am fully committed to Sunderland because I love the institution and traditions of this club.

"I am staying at Sunderland next season and the foreseeable future as I am looking forward to meeting my team-mates and Sunderland fans when we return next month," Gyan told MTNFootball while holidaying in his home country.

Gyan made a total of 33 appearances last season for the Black Cats, scoring 11 goals after joining the club from Rennes.

The former Rennes striker headed for the Stadium of Light in a Â£13 million-plus move from Rennes last summer but the Stoke link has raised eyebrows.

Stoke and Sunderland have done plenty of business with each other in the past, notably last summer when Kenwyne Jones left the Black Cats to join Stoke for a club record fee of Â£8m, which could be broken by Gyan's potential arrival.

Read the full interview with Asamoah Gyan on MTNFootball.com on Wednesday, 22 June 2011.