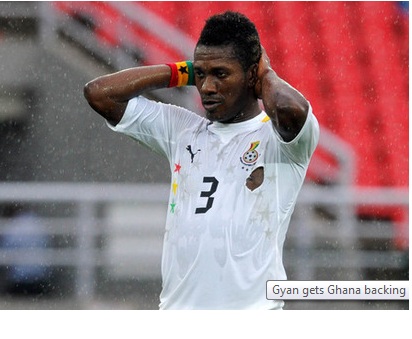 Ghana striker Asamoah Gyan has revealed he has lost the psychological battle to continue playing for the Black Stars, the player explained via twitter.

The Al Ain ace claims a second penalty miss at a major tournament has hunted him as a player.

The Black Stars top scorer with 28 goals missed a penalty in the semi-final clash against Zambia and was made the scapegoat for the team's inability to reach a second successive final.

He was severely criticized on social networking sites and some threatening his life.

Gyan claims he never recovered from the last minute penalty miss against Uruguay in the quarter-final of the 2010 Fifa World Cup in South Africa.

He smashed his spot-kick against the cross-bar and denied Ghana a historic World Cup semi-final berth.

The 25-year-old has asked permission to go an indefinite break to help him recover fully from his latest setbacks.

His decision has been met with mixed reaction with others saying it is good riddance.

"Firstly, it's important that I express my sincere apologies to my country. I never intended to make a decision like this early on in my career.

"Psychologically I am down. As you can imagine It's been very hard for me mentally to miss two important successive penalties for my country.

"And because of this, a break to recoup my thoughts and emotions will aid me to come back bigger and mentally stronger.

"I want my country to know I love playing for them and I wouldn't be who I am without them.

"I would like to ask for prayers and support from Ghanaians to help me to come back with a renewed strength to continue serving my country.''