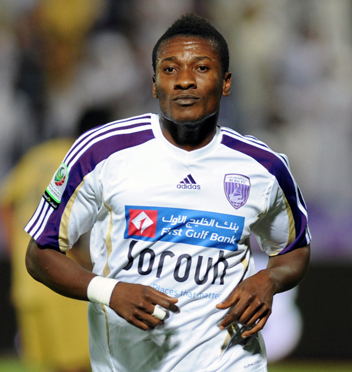 Ghanaian striker Asamoah Gyan scored twice as Al Ain thrashed Ajman 4-0 in the final game of the season on Saturday.

The on-loan Sunderland striker scored the second for the runaway UAE Pro League winners in the 63rd minute and finished it off ten minutes from time to send the packed Tahnoun Bin Mohammad Stadium agog.

The 26-year-old thus finishes the season as the leagueâ€™s Top Goal scorer having racked up 22 goals which helped the former Asian Champions League winners to their 10th top flight success â€“ the most won in the UAE Pro League.

Though Ajman dominated and saw more of the goalmouth action, the champions struck in the 33rd minute through Ignacio Scocco. He sent Gyan through with a brilliant forward pass and the latter pulled the ball back for Scocco to finish off the move in style.

Karim Kerkar stunned the Al Ain fans when he shot from his own half after seeing Al Ain goalkeeper Waleed Salem out of his charge but the ball hit the crossbar and went out.

That chance came before Al Ain's opener and after conceding the goal; Ajman's Abdullah Almaghy and Hassan Matouk saw their efforts saved by Salem.

However after the break Omar Abdul Rahman dribbled his way into the box and then passed to Gyan who tapped home for the second goal in the 63rd minute.

Four minutes later, the highly skilled Omar scored when he made no mistake with a rebound and with ten minutes left again did the spadework for Gyan to shoot his second and ensure Al Ain celebrated in style.