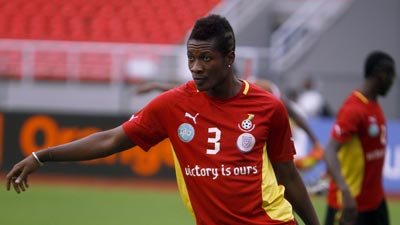 Ghana strikers Asamoah Gyan and Jordan Ayew are among the top scorers for the 2017 Africa Cup of Nations after the first two round of the match.

The Black Stars duo are tied at third place on two goals apiece going into the third round of matches.

The pack is led by Congolese striker Dore, Egyptian star Morsy and Algeria's foreign-based attacker Soudani who all have four goals each.

Tunisis striker Yassine Chikhaoui is the only player on three goals with Gyan and Ayew among the ten player who ave two goals each.

Ghana will play Mozambique on Thursday and Sunday in back-to-back qualifiers.

Africa Cup of Nations leading scorers ahead of matchday 3 and 4 qualifiers from Wednesday for 2017 tournament in Gabon: 4: Dore (CGO), Morsy (EGY), Soudani (ALG),