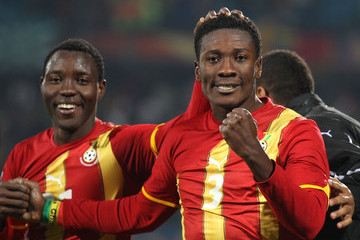 Striker Asamoah Gyan is upbeat of Ghana's chances at next year's Africa Cup of Nations in Gabon and Equatorial Guinea.

The Black Stars have been tagged as overwhelming favourites to end the 30-year wait for an African title following the failure of giants; Egypt, Cameroon and Nigeria to qualify for the finals.

This has placed some sort of pressure on the team who are expected to win the tournament consideringÂ theÂ gradual progression in the last two editions.

This pressure, according to Gyan though very much welcomed would certainly make the campaign an even more difficult one.

"It's been a while since we won it and we want to win it," the Al-Ain striker said.

"Most of the big guys are out now -- I'm talking about Egypt, Cameroon, Nigeria -- so now people are looking up to us.

It's not going to be easy but we will see if we can do that."

Ghana have been drawn in Group D which will be based in the Gabonese city of Franceville alongside Botswana, Guinea and Mali.