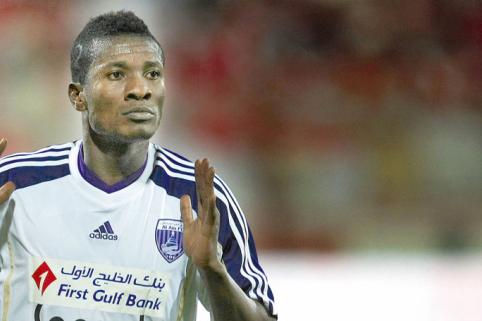 Ghana striker Asamoah Gyan is set to win top awards in the UAE on Saturday when his club Al Ain are officially crowned as the Pro League champions tonight.

The Ghana striker will be named the top scorer for the league and he is also likely to win the best player award following his heroics.

Nothing will hinder the celebration as Al Ain fans are set to fill the 12,000-capacity Tahnoun bin Mohammed stadium for their rescheduled final league game against Ajman.

Mohamed Rashid Al Omda, the head of the Al Ain Fans Society, said elaborate plans have been made to celebrate Al Ain's 10 league titles under the theme of "Our love to Khalifa", (Sheikh Khalifa bin Zayed, President of the UAE and Ruler of Abu Dhabi).

"The club management has lined up several surprises for the fans that include giveaways and free gifts, and cash prizes for the best decorated cars," he said.

A victory parade will take place after the game from the stadium towards Al Karis roundabout to Al Jimi and Al Tawia roundabout and back to the stadium.

Al Ain had the league won with three games to play after the 2-0 home victory over Al Jazira more than a month ago.

Gyan has scored 20 goals in 20 games for his club he joined in September last year on loan from Sunderland.