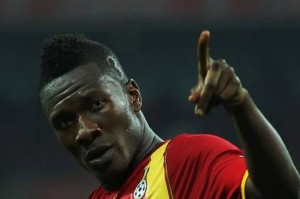 The Al Ain handed the Black Stars the precious ace tucked in from close range in the Group D contest against Sudan at the Al Merreikh Stadium in Omdurman.

Gyan has had his ups and downs with international football since making and scoring his debut in 2003 against Somalia in a 2014 World Cup qualifier.

In 2008, he nearly quit the national team after coming under a barrage of criticism for his profligacy at the 2008 Africa Cup of Nations on home soil.

The 27-year-old took a temporary break from international following severe backlash at the Nations Cup finals in Gabon and Equatorial Guinea.

He missed a penalty in the 1-0 semi-final defeat to eventual winners Zambia.

Gyan was instrumental in Ghana's two World Cup campaigns by emerging top scorer for the team in Germany 2006 and four years later in South Africa.