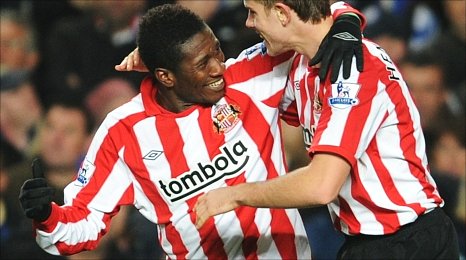 Ghana's Asamoah Gyan confirmed his status as one of the best strikers in the world when he scored for Sunderland to thrash Chelsea 3-0 in a Premier league game in London on Sunday.

His performance against one of the respected clubs in the world has alerted the world of his talent, with his fourth goal in three successive Premier league starts

Chelsea were convincingly beaten as they succumbed to a sparkling Sunderland display which was lighted by Gyan and another Ghanaian Danny Welbeck.

Gyan expertly guided in a shot after a well-worked Black Cats move to leave the home side rattled.

The lively Welbeck secured a memorable Sunderland win when he sidefooted in from Ashley Cole's poor backpass.

The pace, movement and energy of Sunderland's strike duo of Gyan and Welbeck was the foundation of a Black Cats win but they were backed up by a steely defence and industrious midfield.

At times, champions Chelsea were overwhelmed as they suffered a first defeat of the season at Stamford Bridge and, more importantly, had their top-flight lead cut to just two points.