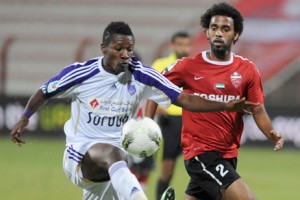 While socks don't feature too high on Asamoah Gyan's Christmas wishlist, come the end of the UAE Pro League season the Ghanaian will surely be celebrating gifts of a very different kind.

A deadly double in Al Ain's 3-1 win over reigning champions Al Jazira last Thursday maintained his side's unbeaten start to the season and continued his own stunning start to life in the Emirates as he took his goalscoring tally for the season to 12 in as many games.

It was a match-winning performance that more than vindicated the praise afforded to him by Jazira boss Franky Vercauteren who hailed GyanÂ as "the most efficient and most important player in the Pro League" in the build-up to the top-of-the-table Christmas cracker.

And so he proved with a devilish display of pace, power and finishing prowess that ultimately proved Jazira's undoing as they succumbed to just their second defeat of the campaign.

On this evidence Gyan is a shoe-in for the Golden Boot this season.

It's no wonder then that one of Martin O'Neill's first acts as Sunderland boss was to express an interest in bringing the club's record signing back to the club from his season-long loan at the Tahnoun Bin Mohammed Stadium.

Gyan however is committed to the cause in the Garden city. Labelled a mercenary for turning his back on the bright lights of the Premier League to join Al AinÂ in a reported world record Â£6million loan deal last September, Gyan has settled well into life in the UAE.

"I know people will be wondering why I moved to the Middle East, but itâ€™s up to me," the striker said in a recent interview. "Whoever said I went for money needs to think twice. I made a decision with my family and the most important thing was for me to be happy and to be with my family. Iâ€™ve started to score some goals, Iâ€™m enjoying myself and itâ€™s a new experience for me."

Al Ain's victory over Jazira, rendered even more impressive as it came in the champions' own backyard, increased their lead at the top of the table to four points over their opponents while their other rivals - namely Al Wasl and Al Ahli - continue to struggle for consistency.

It marks a stunning turnaround for a club that just 12 months ago was in the midsts of a wretched campaign which only saw them avoid the ignominy of relegation in the final few weeks of the season, eventually finishing 10th.

Fastforward to present day and the transformation has been nothing short of miraculous. Credit for that must go to Romanian coach Cosmin Olariou, who has instilled belief and discipline in the side following his appointment in the summer.

The 42-year-old has a proven track record having led Steaua Bucharest to the UEFA Cup semi-finals in 2006, the same season as they also won the domestic double with league and cup triumphs. And he appears to have found that winning formula in Al Ain.

Olarious's fellow Romanian Mirel Radoi has been another standout performer for the side whether deployed in defence or in the holding midfield role with his influence just as noteworth as Gyan's.

Argentine schemer Ignacio Scocco, a summer capture from AEK Athens, has also been a shrewd purchase with the diminutive midfielder providing a subtlety to Al Ain's play that was evidently lacking last season and the ammunition for Gyan.

Tough tests await in 2012 for The Boss, with Gyan's enforced absence due to his involvement in the African Cup of Nations potentially season-defining.

Jazira's strength in depth and their title-winning nous coupled with Al Shabab's attacking verve ought to ensure both sides there or thereabouts come the end of the campaign.

However, from what we have been treated to so far from Gyan and Co. don't expect the wheels to come tumbling off as Al Ain eye an unprecedented 10th league crown.